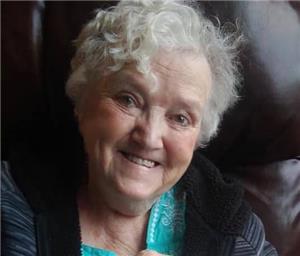 Judy Ann Harley was born on July 17, 1941 to James R. and Alice A. (Platt) Webb in
Oconomowoc, Wisconsin. During her childhood, she lived in many different places as her mother moved around as she worked as a teacher. She attended school in Mitchell, South Dakota and later earned her G.E.D. She worked as a waitress and later as a CNA.
For a time, she lived in Montana before moving to Washington to be near her sister. She called Washington home for several years before moving to Scotland, South Dakota in 2005 with her son, James Harley. At that time, they took three granddaughters under their wings.
As a child, Judy realized her love of horses when her Grandpa Platt gave her her first horse named Fox. She would then continue to raise and adore horses throughout her entire life. In her spare time, she often showed horses in competitions as well as broke them to ride. Judy dearly loved her grandchildren and kept the tradition alive by teaching them the joys of horses and riding.
Judy was an incredibly strong-willed woman who deeply loved her grandchildren. She was stylish, enjoyed getting dressed up, and dancing.
Judy passed away on Sunday, February 24, 2019 at Good Samaritan Society - North Point in Tyndall, South Dakota having attained the age of 77 years, 7 months, and 7 days.
Judy is survived and remembered by her three children: Debbi Schock of Yankton, SD, Tom Harley, Sr. of Washington, and Michael (Debbie) Harley of Washington; nine grandchildren: Matthew (Amber) Tippie, JJ (fiancee Amy) Tippie, Butch (fiancee Aimee) Harley, Claire (Michael) Sestak, Olivia (Chris) Heinzman, Aloha (fiancee Lukas) Russell, Tommy (fiancee Marina) Harley Jr., Jacob (Brandi) Harley, and Rachel (fiancee Andy) Harley; thirteen great-grandchildren: Amanda, Brandon, Mason, Corbin, Lilly, Sisalee, Kaylee, Ezekiel, Robert, Annalee, Acamds, Laken, and Gabriel; her sister Sue (Gert) Pilemalm and nephews, Kevin (Elisa) Pilemalm and Roland (Audriana) Pilemalm; friends, and her beloved pets, her dog Duke and her horses, Red and Coco.
To order memorial trees or send flowers to the family in memory of Judy Ann Harley, please visit our flower store.