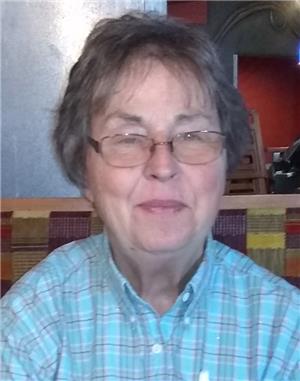 It is with a heavy heart that we inform that Karen J. Stekly, age 72 of Platte, SD, went to her heavenly home April 30, 2020, after knee replacement that resulted in a cancer diagnosis early this year.
A private family Mass will be held 11 a.m. Tuesday, May 5, 2020 at St. Leo Catholic Church Tyndall, SD. The service may be viewed live stream at www.goglinfh.com Karen Josephine Stekly. Burial will be at Czech National Cemetery, rural Tyndall.
Karen was born Friday, October 31, 1947, in Yankton, SD, to Willie and Lorraine (Schiferl) Schwarz. She grew up on the family farm about 10 miles west of Yankton and attended country school. She graduated from Mount Marty High School at Yankton in 1965. During her high school years, she took accordion lessons in Scotland, SD, which was where she met John F. Stekly from Wagner, SD. They eventually went to prom together, started dating and were married at Yankton August 8, 1970. Karen and John F. had one child, John W. Stekly. Karen and John F. played accordion duets for many events and people during their married life.
While John F. was working toward his optometric education, Karen attended college at Briar Cliff in Sioux City, IA; USD in Vermillion, SD and the University of Houston in Houston, TX. She attained the degrees of BS and MS in Education from the University of Houston, a Master’s of Arts from USD and was certified in the areas of Guidance and Counseling and Special Education. She also completed the Dale Carnegie Course. Karen’s credentials were often underestimated because of her low-key nature. Because she was low-key, many people misunderstood her and her quiet natured heart.
She and John F. moved to Platte in 1971 where John F. started his optometry practice and Karen taught school in Platte, at rural Hutterite Schools and also tutored students. She concluded her teaching career as a Head Start teacher. During that same time, she became involved with, and much of her time was spent in, a rental property business and riding her horses as a hobby. Karen had at least one horse for most of her life and in later years would drive a buggy on wagon trains, which she did until last year.
Karen was very close to her faith. She was a prayer warrior and prayed for many people and matters of concern silently and regularly.
While not a great cook, she was an excellent wife, mother, helper of many and loved her grandchildren, Ashley E. Stekly and John J. Stekly. She is survived by son John W. (Sara) Stekly and children Ashley and John J. Stekly of Platte, SD; her sister-in-law Rose Ann Schwarz of Yankton, SD; her brother Bruce (Donna) Schwarz and brother Lawrence Schwarz, all of Yankton, SD; and nieces, nephews, grandnieces and grandnephews.
She was preceded in death by her parents, brother Donald, sister-in-law Esther and husband John F. Stekly.

To order memorial trees or send flowers to the family in memory of Karen Josephine Stekly, please visit our flower store.
Open