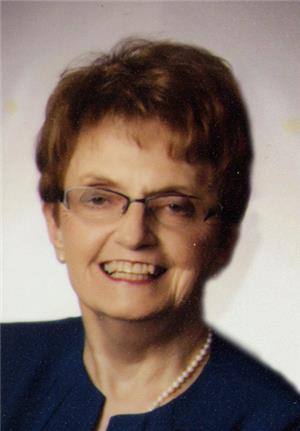 Clergy
Fr. Larry Regynski
Giftbearers
Amy & Jenny Van Osdel
Scriptures
Book of Wisdom 3:1-6, 9
1st Thessalonians 1:13-18
Luke 24:13-35
Music
Organist ~ Shirley Jennewein
Congregational Hymns
“On Eagle’s Wings #436”
“Shepherd Me, O God #457”
“Prayer of St. Francis #523”
“One Bread, One Body #339”
“Song of Farewell #826”
“Amazing Grace #432”
Kathleen Van Osdel, 74, of Yankton, South Dakota, died Tuesday, May 28, 2019, at Avera Sister James Care Center after enduring a lengthy, debilitating illness. Visitation will be on Thursday, May 30, at Goglin Funeral Home of Yankton from 6:00 p.m. to 6:45 p.m. followed by recitation of the Rosary and wake service at 7:00 p.m. The funeral Mass will be 10:30 a.m. on Friday, May 31, at Sacred Heart Catholic Church with the Rev. Larry Regynski officiating.
Kathleen Cadieux was born Feb. 11, 1945 in Astoria, Ore. to Mr. and Mrs. Kenneth J. (Edna McClay) Cadieux where her father was stationed while he was recuperating from injuries sustained while serving as a Navy medical corpsman in one of the battles for Guadalcanal in the South Pacific theatre of WWII. The family lived for a time in Seaside, Ore., until Mr. Cadieux was honorably discharged from the service at which time they moved back to their home town of Jamestown, N.D.

The Cadieux family lived in Jamestown, N.D., Bowman, N.D., Moorhead, Min., and later Sioux Falls.  Kathleen was a 1963 graduate of O’Gorman High School and a 1967 graduate of Mount Marty College. She enjoyed maintaining close ties with her classmates of both schools, including first Wednesday lunches with O’Gorman classmates in Sioux Falls, until ill health prevented travel.  She was especially proud to have been able to participate in the planning of their 50th high school class reunion in 2013.

Kathy taught religious education classes for elementary students at Sacred Heart Church during and after her college graduation and for a time after her marriage. She also served several years as a Girl Scout leader, taking her girls on many educational outings, such as a visit to the Laura Ingalls Wilder center in DeSmet, various campouts and a trip to the Mall of America.

Her Girl Scout troop, using a set of historic flags from the Elks Lodge, served as the color guard at the banquet in Mount Marty College Roncalli Center when Gov. George S. Mickelson resided in Yankton on one of his “Capitol for the Day” excursions.

Kathy and Jim and her Girl Scout troop and parents helped clean up Friday, Saturday and Sunday at the second River Boat Days event. Their suggestions led to use of wire recycle containers for aluminum cans used since.

Kathy was employed as a social worker for the S.D. Department of Social Services from just several days after college graduation until 1974, retiring at that time to devote her time to her children. During her career with the S.D. Department of Social Services, she was called upon many times to arrange for emergency foster care for children in need and helped facilitate many adoptions.

She was later employed as a social worker at the Human Services Center on the Pierce geriatric unit and in the Kanner building  until 1996.

She was married to James L. Van Osdel Sept. 18, 1971 and the couple had two children, Jay Lyle, Gulfport, Miss.; and Amy Leigh, Yankton S.D. She also had five grandchildren.