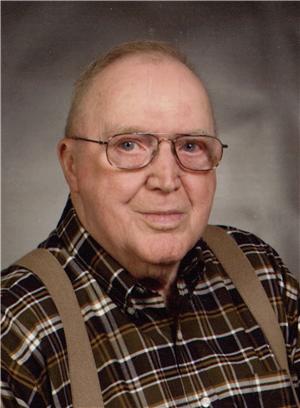 CLERGY
Rev. David Wildermuth
MUSIC
Pianist ~ Marilyn Nyburg
Congregational Hymns
“What a Friend We Have in Jesus”
“In the Garden”
“I Love to Tell the Story”
“How Great Thou Art”
LaRaye Edward Andersen was born on Tuesday, January 21, 1936 to Raymond A. and Verna E. (Madsen) Andersen in Irene, South Dakota. He graduated from Irene High School in 1954. From 1954 to 1956, LaRaye served his country in the U.S. Army. Following his discharge, he went on to attend two years at Nettleton Commercial College. On November 19, 1960, LaRaye was united in marriage to Norma J. Pudwill at the First Presbyterian Church in Avon. Through the years, LaRaye worked at Sioux Steel Co. in Sioux Falls, Midland National Insurance Co. in Watertown, Lutheran Brotherhood Insurance in Minneapolis, MN, Dennis Aune Trucking in Irene, and Alumax Extrusions in Yankton. He was a member of Trinity Lutheran Church and of many organizations in Yankton including the Elks Lodge, Moose Lodge, and Yankton Senior Center. LaRaye enjoyed collecting caps, and had one for nearly every occasion. He also loved college basketball, especially the Duke, North Carolina, and Kansas teams.
LaRaye passed away on Sunday, March 1, 2015 at Avera-Sacred Heart Hospital in Yankton having attained the age of 79 years, 1 month, and 8 days.
He is survived and remembered by his wife of 54 years, Norma Andersen of Yankton; children: Troy Andersen of Kansas City, MO and Jon (Heidi) Andersen of Yankton; granddaughters: Emily Andersen of Denver, CO and Ellen Andersen of Yankton; brother Vernal (Pat) Andersen of Sioux Falls; sisters: Vyonne Bak of Helena, MT and Roslyn Bainbridge of Sioux Falls; mother-in-law Hattie Pudwill of Yankton; brother-in-law Terry (Nancy) Pudwill of Evergreen, CO; five nephews; one niece; and several cousins and friends.
He was preceded in death by his parents Raymond and Verna Andersen, father-in-law Elmer Pudwill, and brother-in-law Bar Bainbridge.
In lieu of flowers, memorials may be directed to the Trinity Lutheran Organ Fund or a charity of your choice.
To order memorial trees or send flowers to the family in memory of LaRaye E. Andersen, please visit our flower store.