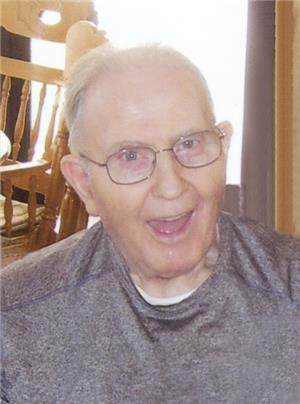 CLERGY
Rev. Greg Way
MUSIC
Organist ~ Shelley Finck
Congregational Hymns
“Bornin’ Cry”
“How Great Thou Art”
CASKETBEARERS
Mark Stoebner, Jeff Hieb,
Darin Ziegler, Jordon Ziegler,
Ryan Roth, & Jon Bueber
Larry Stoebner was born on December 26,1935 to Gottlieb and Emelia (Winckler) Stoebner on a farm northwest of Tripp, SD. He attended Union District # 77 country school. He also attended college briefly at Dakota Wesleyan University where he studied ministry. He served as a Sunday school teacher at Friedens Reformed Church and also served in the National Guard for several years. In 1976 he married Shirley Ann Malaj at Friedens Reformed Church in Tripp. They lived in Yankton, SD for 11 years before returning to Tripp and raising two sons, Gregory and Herbert. Larry and Shirley were able to celebrate 32 years of a devoted marriage together.
Larry loved to farm and fish in his younger years and took an interest in collecting rocks and other various knickknacks. In his later years, Larry enjoyed giving wheelchair rides to his granddaughter Emelia and watching cartoons with her during their visits.
Larry Stoebner passed away at the Good Samaritan Center in Scotland, SD on Tuesday, March 6, 2018 at the age of 82 years old.
He was preceded in death by his father Gottlieb, mother Emelia, sister Clara, wife Shirley, brothers Helmuth and his wife Elaine Stoebner, Aaron and his wife Elverna Stoebner, and Reno Stoebner.
He is survived by his son Gregory (Amanda) Stoebner and granddaughter Emelia of Webster, SD, son Herbert Stoebner of Sioux Falls, SD and sister-in-law Sandra Stoebner of Parkston, SD and many nieces and nephews.

To order memorial trees or send flowers to the family in memory of Larry Stoebner, please visit our flower store.