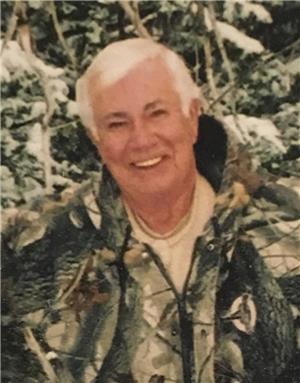 Larye Roland Johnson was born on April 5, 1936 to Elmer “Swede” and Opal (Wintersteen) Johnson in Olivet, South Dakota. He graduated Olivet Grade School in 1950 and Menno High School in 1954. On September 5, 1956, Larye enlisted in the United States Army. He completed basic training at Fort Chaffer, Arkansas and was permanently stationed at Fort Carson, Colorado. He was honorably discharged on June 4, 1958 having attained the rank of SP3.
On June 24, 1960, he was united in marriage to the love of his life Joan G. Hesla in Scotland, South Dakota.
In 1960, Larye earned his bachelor’s degree at South State Teacher’s College in Springfield. He taught in Ft. Pierre, SD for two years and then spent four years teaching in Melvin, Iowa. He went on to earn his Master’s degree at the University of South Dakota in 1967 and earned his Vocational Certificate at the University of Northern Iowa in 1968. For the next 30 years, from 1967 to 1997, Larye taught Vocational Education in Harlan, IA.
In his lifetime, Larye taught for more than 36 years. Larye was extremely proud of his many students who went on to succeed in business and banking careers. The friendships and memories he formed with his students lasted well into their adulthoods, and were one of his proudest accomplishments.
Larye always had an interest in the great outdoors.  He passed this love to all that visited with him. Larye and his family and friends spent many summers fishing and having good times at their little red cabin in Northern Minnesota.
Following Joan’s death, Larye returned to his hometown area to live in Scotland. The return allowed him to once again enjoy attending the Olivet United Methodist Church, the church he was baptized in. He spent his summers working as a campground manager at Riverside Campground on the Missouri River near Platte, SD. Along with hunting and fishing, Larye also had a hobby of designing and making signs for Riverside Campground. If you’re there you will surely see them. He loved waking up every morning to the sunrise on the horizon and the promise of a great catch waiting for him on the river.
Every year since 2001, he also took part in the Buffalo Roundup at Custer State Park and was a volunteer park ranger in the Black Hills. The mountains were Larye’s personal cathedral; the forest his place of worship. Every day he was alive, God beckoned him outdoors with a song in his heart and a joke at the ready.
Larye passed away on Easter Sunday, April 16, 2017 at Landmann-Jungman Memorial Hospital Avera in Scotland, having attained the age of 81 years and 11 days.
He is survived and remembered by his children Cindy (Dean) Lefeber of Harlan, IA and Brad (Michelle) Johnson of San Antonio, TX; grandchildren: Nicholas Johnson, Haley Johnson, Sarah Lefeber, and Tyler (Jana) Lefeber; mother Opal Johnson of Orange City, IA; sister-in-law Barbara Bloes; and two brothers-in- law, Don Guthmiller of Orange City, Iowa and Charles Zeeb of Sioux Falls, SD.
He was preceded in death by his wife Joan in 1998, his father, sisters Sally Guthmiller and Donna Zeeb, and brother-in-law Richard Powell. We know they’re all sitting around a campfire right now, laughing and dancing at a lakeside cabin in heaven. As Larye put it, he’s either hunting, fishing, or out having fun.
To order memorial trees or send flowers to the family in memory of Larye Johnson, please visit our flower store.