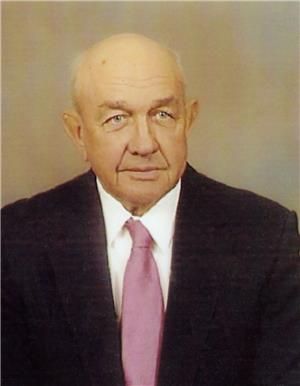 CLERGY
Rev. Greg Way
MUSIC
Organist ~ Karen Huether
Special Music ~ Lennis Mehlhaff
Congregational Hymns
“On Eagle’s Wings”
“Precious Lord, Take My Hand”
“How Great Thou Art”
CASKETBEARERS
Brian Sandau, Jamie Sandau, Justin Kangas,
Jordan Ziegler, & David O’Keefe
Lawrence Sandau, born March 21, 1928, was the eldest son of Arnold and Edna (Davis) Sandau. Lawrence graduated from Tripp High School. After graduation he worked for Kotas Implement doing electrical work until he entered the army in 1950. He served in Korea until he was discharged in 1952, then married Betty Pelton on November 17, 1954. They moved to many towns building churches until they returned to Tripp in 1963 where they raised their family. Lawrence worked for Hattendorf Construction and Morgan Masonry before establishing Sandau Construction in 1978.
Throughout his life, Lawrence was very active in the community and with his family. He served on the city council, was a member of the American Legion where he served as the commander, and held several offices in the Methodist Church. In his retirement, he spent a lot of time at his grandchildren’s events and enjoyed mowing.
His masonry work is a reflection of how he lived his life: steady, unwavering, and precise.
Lawrence passed away on September 14, 2017, at Avera St. Benedict Hospital in Parkston. He is survived by his wife, Betty; his children Lynne (Don) Haenke, Doug (Marie) Sandau, and Jeff Sandau; and his grandchildren Jennifer, Brian, Jamie, Nancy, Julie, Nikki, Sam, and Jessica, and eleven great grandchildren.
Lawrence was preceded in death by parents, his brother Verlyn, and great granddaughter Caleigh.
To order memorial trees or send flowers to the family in memory of Lawrence Willis Sandau, please visit our flower store.