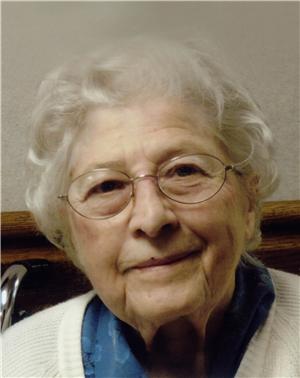 OFFICIATING
Dan VanGerpen
MUSIC
“On Eagle’s Wings”
“Oh Come, All Ye Faithful”
“How Great Thou Art”
CASKETBEARERS
Aaron Dewald
Brian Dewald
Matthew Dewald
Donald Hauck
Allen Friederich
Jerry Friederich
Lenora Dewald was born on Wednesday, October 17, 1923 in Tripp, South Dakota to Carl and Albina (Stoebner) Keller. She attended country school in Hutchinson County. On January 23, 1947, Lenora was united in marriage to Julius Dewald in Tripp. Lenora was a gracious and caring woman who took pride in her work as a homemaker and caretaker. She worked as a dietician at the Good Samaritan Society of Tyndall and also spent many hours cooking at St. Michael’s Hospital in Tyndall. She found great worth in her relationships and continually sought to take care of her family, friends and neighbors. Lenora loved socializing and always looked forward to her card playing get-togethers with her friends. Though she kept busy caring for others, she somehow found time to enjoy her hobby of cross-stitching. Lenora died on Tuesday, December 10, 2013 at the Avera Yankton Care Center in Yankton, South Dakota at the age of 90 years, 1 month and 23 days.
She is survived by her two sons: Richard (Sandy) Dewald of Yankton and James Dewald of Castlewood; four grandchildren: Matthew and wife Hannah, Jenny and husband Austin, Brian, and Aaron; three brothers: Elmer Keller of Georgia, Ruben Keller of Sioux Falls, and Melvin Keller of Sioux Falls; and one sister, Bertha Friederich of Tripp.
She was preceded in death by her husband, Julius Dewald in May of 1977, and her parents, Carl and Albina Keller.
To order memorial trees or send flowers to the family in memory of Lenora  Dewald, please visit our flower store.