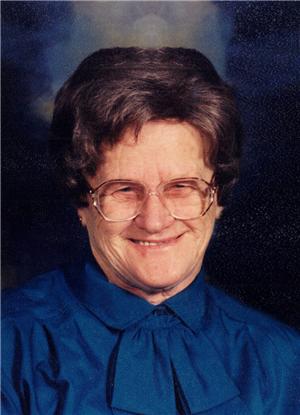 CELEBRANT
Fr. Joe Forcelle
MUSIC
Organist ~ Kathy Koenig
CASKETBEARERS
Scott Ehrisman
Ken Becvar
David Becvar
Willie Crews
Richard Becvar
Sean Ehrisman
Leona May Becvar was born on Monday, May 14, 1928 to Carl Schmoll and Freda Rueb Schmoll Bren in Tyndall, South Dakota. She graduated Tyndall High School in 1947. In May of 1955, Leona and her sons, Larry and Michael, moved back to Tyndall from Washington. She then worked as a night cook for Basil in his café for a year and a half, which is where she met Laddie. They dated for a couple years, attending dances near Yankton. On August 10, 1959, Leona was united in marriage to Laddie Becvar at St. Leo Catholic Church in Tyndall. Together, the family made their new home on a farm near Tyndall. Laddie built most of the farm buildings that went on to house their chickens, pigs, and cattle. Leona was a strong, Christian woman who loved her family. She especially enjoyed her grandchildren and cherished the times she spent with them.
Leona passed away on Thursday, January 8, 2015 at the Good Samaritan Society of Tyndall having attained the age of 86 years, 7 months, and 25 days.
She is survived and remembered by her husband, Laddie Becvar of Tyndall; sons: Larry (Cheryl) of Marysville, WA and Michael of Cheyenne, WY; grandchildren: Sean, Scott, Ashleigh, Abbie, and Jessie; great-grandchildren: Brittany, Matthew, Joseph, and Jaxon; and many nieces and nephews.
She is preceded in death by her parents, step-father Ed Bren, brother Elmer Schmoll, sister-in-law Georgia Schmoll, and sisters: Leona in infancy, Marcella Younger, Viola Stemper, and Beverly Ranek.
As Leona signed her letters, “God be with you and yours.”

To order memorial trees or send flowers to the family in memory of Leona May Becvar, please visit our flower store.