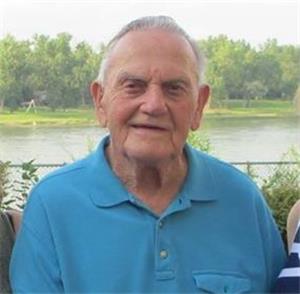 Leonard Martin Hisek was born on August 15, 1924 to James and Emma (Mraz) Hisek on the family farm southeast of Tyndall.
Leonard passed away peacefully at twilight on March 27, 2018 at Good Samaritan Society-Tyndall. He was 93 years old, had grown tired and knew his work was done here.
As a child, Leonard went to Pleasant Valley District #78 country school and graduated in 1942 from Tyndall High School.
On February 20, 1943, with WWII in progress, Leonard volunteered for the US Army and the following week went off to Ft. Campbell for basic training. He was soon on his way to the Philippine Islands, where he was a gunner/driver on a Sherman tank. Three of his brothers were in the service at the same time and he had the fortune of meeting his brother Frank for a shared day of R&R in Manila. He was discharged on December 29, 1945 and headed home. Leonard was a Purple Heart recipient and proud to have served his country.
After meeting his future wife, Marie Cahoy, at his brother’s wedding, they married on October 18, 1949 in Tabor, SD. They settled into married life, enjoying many friendships and sharing life’s joys and responsibilities. They had three daughters, Janice, Connie and Shelly and loved them unconditionally.
Leonard worked at various jobs including Bouska Construction, Vojtisek Bricklaying, and Tyndall Hatchery until finding his niche as the custodian at the Tyndall/Bon Homme school district, working there from 1962 to 1989. He truly loved being around the students, joking around with them, and keeping an eye on them.
Leonard played as hard as he worked. He looked forward to the annual pheasant hunt with son-in-law Pete and his North Carolina group. Leonard was a longtime member of the Roy’s Bar softball team, an avid bowler, card player, and did woodworking as a hobby. He was a lifetime member of St. Leo’s Catholic Church, Knights of Columbus, and the Simek-Ptak VFW Post #6895, including post commander.
His patriotism continued throughout his lifetime by having a flag fly almost daily at his home and participating in the local Memorial Day services until he turned 90.
After remaining in their home as long as possible, Leonard and Marie moved to the Good Samaritan Society in April of 2017, and they were happy as long as they were together. At his new home, he found another veteran to salute each day. Of course, he had a US flag outside his room.
He is survived by his wife, Marie of Tyndall; his children: Jan (Pete) O’Toole of Fayetteville, NC, Connie (Roger) Svanda of Tyndall, Shelly (Dan) Lewis of North Sioux City, SD; six grandchildren:  Patrick (Gina) O’Toole, Dawn O’Toole, Christopher (Jamie) Svanda, Cory Svanda, Carly (Sam Small) Svanda, Aubrie Wauhob; great grandchildren: Carly O’Toole, Connor O’Toole, and Carter Small; his brother, George Hisek, of Tyndall; sister-in-law, Mary Jane Hisek, Yankton; and many other nieces, nephews, and relatives.
He was preceded in death by his parents, parents-in-law Rudolph and Ella Cahoy; brothers: Frank, Ed, Jim, Leo; twin sister, Leona Hinzman; and many brother and sister in-laws.
In lieu of flowers, the family will gratefully accept donations for the Tyndall Veterans Club.
To order memorial trees or send flowers to the family in memory of Leonard Martin Hisek, please visit our flower store.