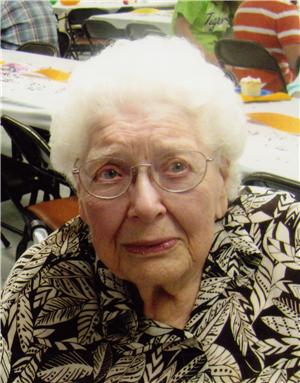 CLERGY
Rev. Ken Johnson
MUSIC
Organist ~ Beverly Rupp
Congregational Hymns
“Amazing Grace”
“Abide With Me”
“How Great Thou Art”
CASKETBEARERS
Robert Bares
Thomas Bares
James Kilker
John Kilker
Gary Loukota
John Uken
Lois Mildred Vogel was born on Thursday, July 13, 1916 in LeMars, Iowa to Erwin C. and Laura (Swain) Kilker. The family moved to a farm south of Tyndall in 1917, and she attended District #30 rural school in Bon Homme County through the 8th grade. Lois graduated from Tyndall High School in 1933. She attended Southern State Teacher’s College in Springfield for two years and taught school for 11 years. Lois was united in marriage to Herbert Vogel in 1946. They moved to Mobridge where they started a business. He died in 1989 and Lois continued to live in Mobridge until the summer of 1996, when she moved to Springfield. Lois was a 45-year member of the American Legion Auxiliary, serving as president of the Mobridge chapter for two years. She became a resident of the Good Samaritan Society of Tyndall in May of 2007 and it is there that she passed away on Friday, May 24, 2013, having attained the age of 96 years, 10 months and 11 days.
Lois is survived by several nieces and nephews. In addition to her parents, Erwin and Laura Kilker, she was preceded in death by her husband, Herb, two brothers: Ronald and Robert, and a sister, Marjorie Kilker.
To order memorial trees or send flowers to the family in memory of Lois Mildred Vogel, please visit our flower store.