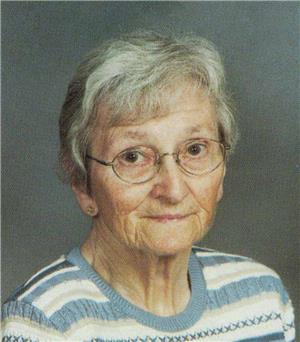 Lorraine Weisser, a loving wife, mother and grandmother of Tyndall and formerly of Tripp, passed away Sunday, April 18 at St. Michael’s Hospital in Tyndall at the age of 94.
Lorraine was born on January 31, 1927 to August and Mathilda (Weisz) Ziegler. She was baptized on February 20, 1927 and confirmed on April 6, 1941 at the Dennewitz Lutheran Church, rural Tripp, SD. She attended country school through the 8th grade, and always seemed proud to mention that she was picked to play at 1st base during their recess softball games. She married Otto Weisser on April 4, 1948, and they lived on Otto’s home farm southeast of Tripp, until 2008, when she moved to Tyndall, SD, and then to Tyndall Hospital Nursing Home in 2016, as her mobility and dementia worsened.
She loved dogs and cats. When growing up, it seemed like there was always a dog with her in most of her pictures. She played accordion in her younger years. She often talked about picking corn with horses with her brothers. She always said that she would rather work outdoors than in the house. She worked hard all her years on the farm, helping Otto with whatever she could with farm chores and especially during harvest season. She milked cows and raised chickens. She did many of the normal things from that generation, like gardening, canning, and cooking good German food like knoephla, strudels, fleischkuechle, and kuchen. She spent many hours mowing a big farm yard. She also did beautiful embroidery work.
When the daughters starting driving, she would always remind them to watch the railroad crossings and intersections on the gravel roads, and to also watch out for deer. Her granddaughters, when they were young, would call her the “Kitty Grandma”, because she had lots of cats on the farm. Lorraine enjoyed get-togethers with the neighbor ladies and going to coffee in Kaylor. In her later years, she liked playing Bingo, working in Fill-In puzzle books, word find books, playing the Golf card game, watching Wheel of Fortune and some TWINS baseball games. She was a lifetime member of the Scotland VFW, and a member of Friedens Reformed Church.
She is survived by daughters, Ileen Weisser, Vermillion, SD, Peggy Vortherms, Yankton, SD, and Marsha (Vince) Efta, Tyndall, SD; granddaughters, Mallory Efta, Salem, SD, and Jamie Efta (Travis Wendt), Sioux Falls, SD; great granddaughter, Millie Wendt; sister, Hulda (Elner) Streyle, Menno, SD; sister-in-law, Martha Ziegler, Menno, SD, and many nieces and nephews.
She was preceded in death by her parents; husband Otto in 1987; grandson Chad Efta in 1991; son-in-law, John Vortherms; siblings Reinhold, Alfred (King), Emil, and Oscar Ziegler, and an infant sister, Regina.

To order memorial trees or send flowers to the family in memory of Lorraine Helena Weisser, please visit our flower store.
Open