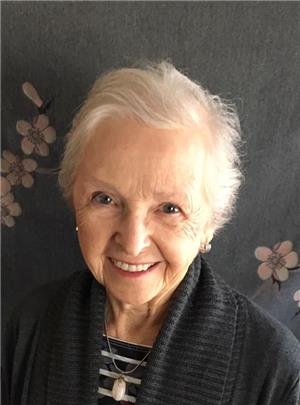 Lou Ella (Anderson – Prochut) Machin, age 89, of Huntsville, Alabama and formerly of Yankton, South Dakota passed away peacefully on Friday, October 16, 2020 at Huntsville, Alabama. A funeral service and a celebration of her life will be arranged at a later date.
Lou Ella Machin was born in Yankton, SD, the second daughter of Harry and Elizabeth (Luken) Anderson on August 1, 1931. She attended one year of country school, Prairie Local #9 before going to first grade at Sacred Heart Catholic School. She attended Yankton High School where she was editor of the school paper and the school yearbook. She continued her education as a graduate of the Sacred Heart Hospital nursing program in 1952.
She married Louis Prochut on August 27, 1952 in Yankton, SD. She followed Lou to California as a draftee during the Korean War. He represented the Marine Corps as an accordionist for the Horace Heidt Talent Show. Lou Ella passed her nursing boards in California to become a registered nurse. After their first daughter was born in Yankton, they moved to the Chicago area where Lou’s television show, The Polka-Go-Round became a popular show for 5 years. The family grew to 6 children during this time. As Lou Prohut’s entertainment world evolved as a soloist and band leader, the children were later included as entertainers. Lou Ella, the “producer” of the family act, supported the efforts of the “Prohut Family Singers and Dancers” for the next 9 years. She created the costumes, managed the schedules, and monitored the education of her family on the road and at home. In 1969 Lou Ella took a nurse’s refresher course and returned to public health nursing and employment at Loyola University Hospital. Lou Prochut died of cancer in May of 1974.
A fellow performer, Wes Harrison, introduce Lou Ella to Victor Machin, an executive with Shure Bros. They married on June 3, 1977 in Arlington Heights, Illinois. They resided there for 3 years and, after retirement, they moved to St. Simons Island, GA for 17 years. In June of 1997 they returned to Yankton, SD, Lou Ella’s beloved hometown. Victor Machin died May 7, 2007.
Lou Ella was involved in a variety of activities and had many interests.
Editor of the Yankton HS newspaper and yearbook
Arikara chapter of the Questers
Member of the Glynn-Brunswick Memorial Hospital Authority 1991-1994
Member of the Golden Isles Rose Society, Bridge Club, Investment Club and New Commers Club.
Yankton EAA Chapter 1029 Young Eagles program
AARP Tax Aide at the Yankton Senior Center
She researched her genealogy extensively and researched her family history.
She was a very generous philanthropist to many charitable organizations in Yankton, SD and St. Simons Island, GA.
Lou Ella Machin is preceded in death by her parents Harry and Betty Anderson, her husband of 22 years Louis Prochut, her husband of nearly 30 years, Victor Machin, and most recently her sister Velma (Anderson) Lane of Yankton, SD.
Lou Ella Machin is survived by her six children, Mary (Si) Marino of New Jersey, Thomas (Deanna) Prochut of Florida, Linda Rosewall of Moltrasio, Italy, Karen Baumbach of Delaware, Richard Prochut of New Jersey, and Maria (Brian) Giles, of Alabama. She also has 12 grandchildren and 7 great-grandchildren.
Her stepchildren are Toni (Lee) Danhour of Illinois and Vicki (Richard) Sipp, with 2 granddaughters and 2 great-granddaughters all living in Michigan.
Memorials may be sent in Lou Ella’s name to:
The Alzheimer’s Association https://www.alz.org/
Team of Walk This Way Team: ID 622155
The Meade Cultural Educational Center https://www.meadbuilding.org/
Benedictine Sisters / Sacred Heart Monastery
1005 W. 8th St. Yankton, SD 57078 605-668-6000 https://yanktonbenedictines.org/contact/
The family of Lou Ella Machin wishes to extend our sincere thanks to the staff and nursing care at Brookdale Jones Farm Assisted Living of Huntsville, Alabama, Amedisys Hospice Care, and her caregivers.

To order memorial trees or send flowers to the family in memory of Lou Ella Machin, please visit our flower store.