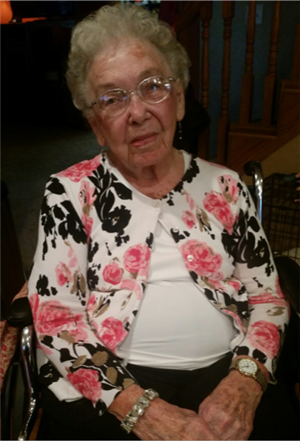 LuCilla Lea Dewald was born on March 18, 1923 to Reinhold and Lydia (Pressler) Goehring, Sr. in Hosmer, SD where her father was in business with his father-in-law, Adam Pressler, at the Hosmer Flour Mill. Her father eventually bought the flour mill, but the mill burned down during the Great Depression so their family moved to Delmont, SD in 1934 when LuCilla was 11 years old. Upon their arrival in Delmont they lived with LuCilla’s paternal grandparents, Michael & Katherine Goehring, until they were able to move to their own farm northwest of Delmont. LuCilla was baptized as a baby in Hosmer and grew up attending and strengthening her faith at the Bethany Reformed United Church of Christ in Delmont, SD. She attended country school as a child and later graduated from Armour High School in 1942. She attended Southern State Normal School in Springfield, SD and received her teaching certificate in 1943. LuCilla was a teacher at various country schools in the Delmont - Dimock area until she married Ray Dewald on September 5th 1948. They moved to his parents' farm south of Tripp, SD where they farmed for 49 years raising corn, soybeans and wheat along with cattle, hogs chickens, ducks and milking cows. Together LuCilla and Ray raised five children. LuCilla loved to garden, bake, embroider, quilt and have church friends and/or relatives over for Sunday dinners. In the early 80’s (due to a tough farm economy) LuCilla became a CNA at the Tripp Good Samaritan Center where she worked for 15 years. She loved her family deeply and spending time with them was very important to her. Her children, grandchildren, great grandchildren and great great grandchildren were her pride and joy. She loved them all unconditionally and prayed over their lives.
On Sunday, November 11, 2018, LuCilla passed away at the age of 95 years, 7 months, and 24 days.
She will be lovingly remembered by her children: Sharon Fischer of Pittsboro, NC; Glenda (Carrol) Langeland of Menno, SD; Larry (Dione) Dewald of Tripp, SD; Julie (Lyle) Blom of Pipestone, MN; and Carol (Jeff) Breitkreutz of Crooks, SD; 14 grandchildren; 21 great grandchildren; 3 great great grandchildren; brother, Jerald (Donna) Goehring of Dakota Dunes, SD; sister, LaVerna Simpfenderfer of Lodi, CA; sister, Arvilla Reich of Tracy, CA; and sister-in-law, Carol Goehring of Mitchell, SD.
She was preceded in death by her parents, her husband, Ray; her brothers, Reinhold, Jr.  & LeRoy Goehring; sister-in-laws, Barbara & Violet Goehring and brother-in-laws, Arthur Simpfenderfer and Roland Reich.
To order memorial trees or send flowers to the family in memory of LuCilla Lea Dewald, please visit our flower store.