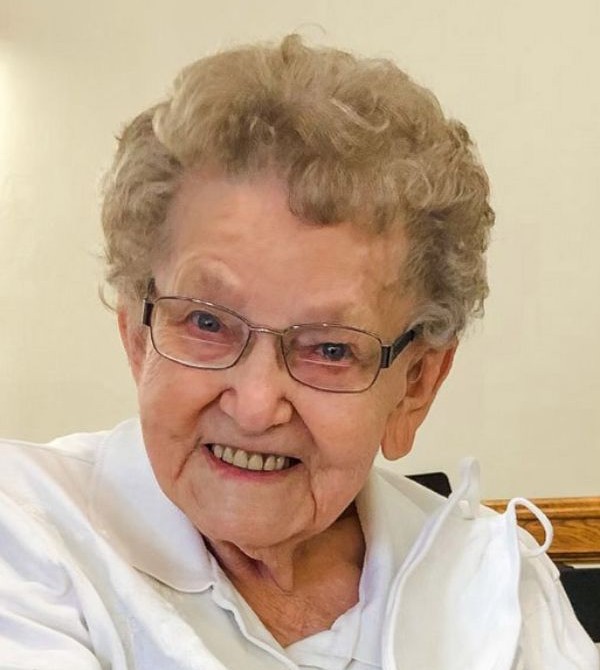 Magdeline “Maggie” Bame of Tyndall, age 97, began her eternal life on Monday, August 15, 2022. She leaves behind a world that is better for the time she spent here and the countless number of people she leaves behind, people who loved her dearly. She left us peacefully assured of her salvation by faith in Jesus Christ.

Magdeline Kubal was born November 26, 1924 to Matthias and Pauline (Sternhagen) Kubal at her Grandma Catherine Sternhagen’s home at Scotland, SD. She lived with her parents on their family farm near Tabor, SD until she married. She attended school at Koupal District 24, a one-room country school. Maggie helped on the family farm, worked with horses, cultivated corn, helped harvest corn by hand and shocked grain. On February 25, 1946 she married Robert L. Bame at St. Wenceslaus Catholic Church at Tabor. The couple was blessed with four children, Catherine, Michael, Dorothy and Charles. Charles was killed in an automobile accident in 1985.

Maggie and Robert farmed north of Tyndall for 57 years before moving to town. Maggie worked as an outreach worker for the L.E.E. program of Scotland for 10 years. She was a volunteer driver, taking people to doctor and other appointments for over 20 years. Before Robert became ill, she also took care of and cooked for a neighborhood friend for 5 years. While living in Tyndall, Maggie became active in the Tyndall Garden Club. Maggie loved to tend to her many flowers and truly enjoyed baking. This is prevalent when looking at the hundreds and hundreds of recipes she clipped and saved. She continued baking and giving away her baked goods to friends and family, up until entering the nursing home in July of 2018. Maggie also spent many years crocheting until her vision began to fail. She also enjoyed watching and feeding the birds outside her home.

Maggie was a member of St. Leo's Catholic Church, Tyndall and the Altar Society. She was a participant of the Tyndall Senior Citizens for many years. As a member of Al-Anon since 1975, she attended 4 international conferences. Maggie loved to travel with her husband. Her travels included many states, including Hawaii and Alaska.

In lieu of flowers the family suggests memorials to be directed to the Bame family to be later designated to Maggie's favorite charities or to be used for Mass intentions.

To order memorial trees or send flowers to the family in memory of Magdeline Catherine Bame, please visit our flower store.
Open