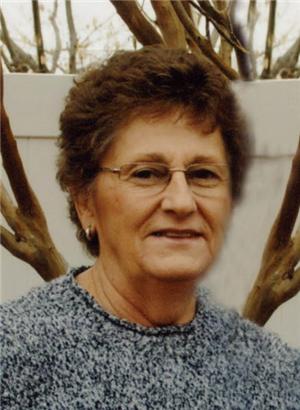 CELEBRANT
Fr. Randy Phillips
MUSIC
Organist ~ Georgianne Pravecek
"Amazing Grace"
"How Great Thou Art"
"On Eagle's Wings"
"Servant's Song"
GIFTBEARERS
Margene’s Granddaughters
READER
Dennis Kronaizl
HONORARY PALLBEARERS
Margene’s Grandchildren
and Daycare Kids
ACTIVE PALLBEARERS
Connor Chambers
Brayden Schaefer
Mark Hento
Jon Hento
Chad Herrboldt
Kraig Kronaizl
Margene Ann Novak was born on January 10, 1947, to Louis & Evangeline Novak. She graduated from Scotland High School in 1965. That same year she met the love of her life, Nilus Schaefer, while attending Mount Marty College in Yankton. They were married on December 27, 1966, and had 3 children: Todd (1968), Tracy (1970) and David (1975). They lived in Omaha, NE, and Keokuk, IA, before returning to Scotland to raise their family.
Margene’s greatest joy in life was spending time with her children and grandchildren. Her greatest legacy is the many lives she touched as a daycare provider for 35-plus years. She became a second mother, grandmother, teacher, friend, and caregiver to countless people who still kept in touch with her.
Margene’s favorite pastimes include gardening, sewing and quilting, reading, and trying new recipes for special celebrations and get-togethers. She also loved camping with Nilus, friends and family, every weekend from May through September. Margene and Nilus loved to travel, and tried to go on one big trip every year. They especially enjoyed going on cruises and bus tours.
Margene was preceded in death by her parents, Evangeline and Louis Novak. She is survived by her husband, Nilus Schaefer of Scotland, SD; her sister, Agnes (LeRoy) Winckler of Spray, OR; three children: Todd (Kayleen) Schaefer of Saginaw, TX, Tracy (Wes) Chambers of Yankton, SD, and David (Lisa) Schaefer of Dell Rapids, SD; nine grandchildren: Savannah, Connor, Audrey, Brayden, Emily, Isabella, Emma, Caitlyn and Lauren; and many nieces and nephews.

Gifts in Margene’s memory may be given to the American Cancer Society to benefit leukemia patients.
To order memorial trees or send flowers to the family in memory of Margene A. Schaefer, please visit our flower store.