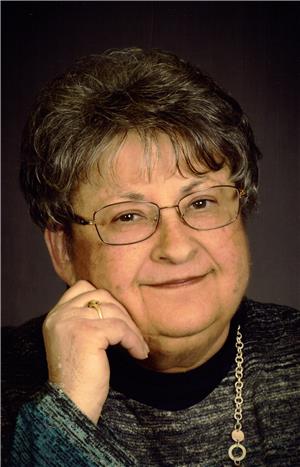 Margery Ann Grosz was born in Scotland, SD on February 28, 1944 to Ruben and Lydia (Wollman) Ulmer. The youngest of three children, she grew up on the family farm southeast of Menno, SD. She graduated from Menno High School in 1962. On August 18, 1963, Marge was united in marriage to Verne Grosz at Grace Lutheran Church in Menno; born to this union, were two sons, Dean and Evan.
Marge worked at the Menno Bank for a short time and then went on to become a full-time farmwife and farm hand on the family farm. After retiring from farming in 1995, Marge went on to work as the bookkeeper for Grosz Welding and held part-time jobs at the Scottie Stop and the Scotland Good Samaritan Center. She was a member of the Zion Lutheran Church, where she taught Sunday School and was an active member of the ZLCW for many years.
Marge was an excellent homemaker and farmwife. She enjoyed collecting Boyds Bears, working in her garden, and canning vegetables. She was an excellent cook and baker, and she never left an empty stomach at the dinner table, especially when the annual silage cutting or cattle working crews came knocking. Besides helping Verne run the family farm, she also excelled at probably the toughest job on the farm, which was cleaning up after her sons and husband. She never left a dirty pile of clothes lay and she had never ending patience with regards to her two son's escapades and Verne’s shenanigans.
For the past 10 years, Marge has enjoyed the company of her significant other, Calvin. They enjoyed spending time with their grandchildren and made frequent trips to Kansas City and Rapid City to spend time with family.
She was a cherished daughter, sister, aunt, mother, grandmother, great-grandmother and friend.
Marge passed away on Tuesday, September 8, 2020 at Landmann-Jungman Memorial Hospital in Scotland, having attained the age of 76 years, 6 months, and 8 days.
She is survived and remembered by her sons: Dean (Lisa) Grosz of Olivet and Evan (Karla) Grosz of Rapid City; grandchildren: Dexter (Stefani), Tyler (Gazmyne), Connor (Kristin), Brett (Heather), Drew (Linnea), Logan (Kaylee), and Hayden (Lizzy); great-grandchildren: Camden, Rhett, Zayden, Teegan, Madelyn, Theodore, Olivia, Terrance, and Riley; brothers Ewald (Joann) Ulmer of Sioux Falls and Don (Lois) Ulmer of Yankton; significant other Calvin Herrboldt of Scotland.
She was preceded in death by her parents.

To order memorial trees or send flowers to the family in memory of Margery Ann Grosz, please visit our flower store.
Open