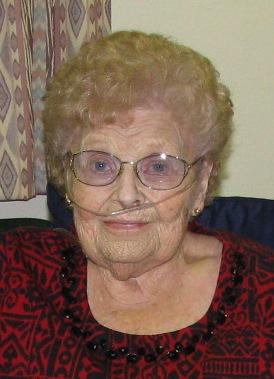 CLERGY
Pastor Tom Petersen
MUSIC
Organist ~ Glee Deutscher
Soloist ~ Barb Bloes
“Lord’s Prayer
“He Touched Me”
Congregational Hymns
“How Great Thou Art”
“In The Garden”
ACTIVE CASKETBEARERS
Brian Jerke
Jason Jerke
Jared Bush
Michael Behl
Kevin Edelman
Mike Olson
Craig Hlavac
Cory Bierle
Brandon Kinzer
Kyle Pechous
HONORARY CASKETBEARERS
Melissa (Jerke) Olson
Lisa (Bush) Edelman
Stacy Auch
Erin Auch
Michelle (Behl) Hlavac
Jennifer (Behl) Bierle
Lindsay (Auch) Kinzer
Marilyn’s 13 Great-Grandchildren
Marilyn R. Behl was born on Tuesday, June 30, 1925 near Scotland, South Dakota to Maynard and Minnie (Reiking) Brooks. She grew up on the family farm and graduated from Scotland High School in 1942. After high school, she began working at Farmer’s and Merchants State Bank of Scotland and worked for the bank for 70 years. Marilyn was united in marriage to Darwin “Bud” Behl on Sunday, June 9, 1946 in a candlelight service at the Scotland Methodist Church. She loved camping with family and friends. In the winter, Marilyn and Bud would go dancing and in the summer they went fishing. Family was very important to Marilyn, and she treasured the gatherings that were spent celebrating holidays and birthdays. She was a wonderful cook and her specialties included lasagna, Hershey bar dessert, apple pie and rhubarb bread. She enjoyed  playing “500” with her card group. Marilyn surrounded herself with flowers, both around her house and in her garden. Marilyn served on the Board of Directors of the Farmers and Merchants State Bank of Scotland for 42 years. Marilyn served on the Board of Directors of the Scotland Holding Company for 29 years. Over the past 32 years of working for the bank, Marilyn sent hundreds of cards and flowers to people for every occasion. When her health allowed, she was very active in the Methodist Church, serving as Treasurer, on the Audit Committee, and the Ladies’ Guild. She was an active member of the Civic Club and the Landmann-Jungman Hospital Auxillary. Marilyn passed away on Monday, January 30, 2012 at the Good Samaritan Society of Scotland at the age of 86 years and 7 months.
Grateful for having shared Marilyn’s life are her husband Bud, of Scotland; four children: Katherine “Kathy” (Leonard) Jerke of Madison, Donna (Victor) Bush of Olivet, Nancy (Larry) Auch of Scotland, and Dick (Peg) Behl of Scotland; eleven grandchildren: Melissa, Jason, Brian, Lisa, Jared, Stacy, Erin, Lindsay, Michelle, Jennifer, and Michael; and 13 great-grandchildren.
In addition to her parents, Maynard and Minnie Brooks, she was preceded in death by a grandson, Brian Jerke; two sisters, Bernice Hesla and Betty Paulson; and one brother, Gerald Brooks
To order memorial trees or send flowers to the family in memory of Marilyn R. Behl, please visit our flower store.