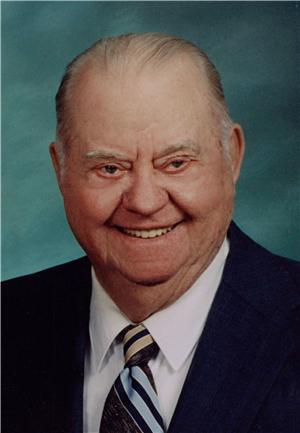 CELEBRANT
Fr. Mathew Vazhappilly
MUSIC
Organist ~ Georgianne Pravecek
Congregational Hymns
“Here I Am, Lord”
“How Great Thou Art”
“I Am the Bread of Life”
“Song of Farewell”
“On Eagle’s Wings”
CASKETBEARERS
Mark Cookson
John Dummer
Mike Dummer
Adam Huntimer
Eric Huntimer
Brian Miller
Chris Robinson
Steve Sayler
Marvin Lawrence “Dick” Petzoldt of Scotland was born on Tuesday, September 20, 1921, in Hubbard, Nebraska to Herman and Gesine (Muddmeir) Petzoldt. He graduated from Scotland High School where he excelled in football and track. He worked in the CCC camps in Sturgis before attending Southern State Normal College in Springfield on a football scholarship. After the bombing of Pearl Harbor, Dick joined the Navy on January 27, 1942. He served on the USS Savannah until it was bombed on September 11, 1943. He was honorably discharged on March 23, 1946. Dick was united in marriage to Rose Ann Freidel in Lesterville, South Dakota, on September 23, 1948. To this union four children were born. They farmed near Scotland before purchasing their farm north of Yankton. In 1980, he retired to Scotland where he was actively involved in the DAV, the Legion, and the VFW. He and Rose loved to travel and attended 23 reunions of the survivors of the USS Savannah. His favorite pastimes were playing cards and playing the harmonica. He generously shared, with friends and family, his produce from his garden and his catch from his fishing trips.  Dick passed away on Wednesday, March 13, 2013, at the Good Samaritan Society of Scotland, having attained the age of 91 years, 5 months and 24 days.
Dick is lovingly remembered by his wife of 64 years, Rose; his four children:  Darlene (Dan) Huntimer of Watertown, Richard Petzoldt of Utica, Duane Petzoldt of Scotland, and Debra (Paul) Dummer of Lesterville; nine grandchildren: Laura Huntimer, Eric Huntimer, Adam (Amy) Huntimer, Mary Huntimer (Chris Robinson), Sara (Mark) Cookson, Mike (Lindsay) Dummer, Katie (Steve) Sayler, Amy (Brian) Miller, and John Dummer; and five great-grandchildren: Allison, Matthew, and Ashley Dummer, Olivia Sayler, and Alexis Huntimer; and many nieces and nephews.
He is preceded in death by his parents, Herman and Gesine Petzoldt, a grandson, thirteen brothers and sisters, and several nieces and nephews.
To order memorial trees or send flowers to the family in memory of Marvin  Lawrence "Dick" Petzoldt, please visit our flower store.