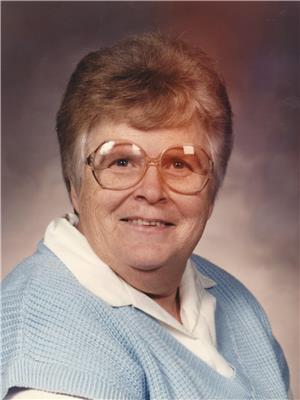 Celebrant
Fr. Randy Phillips
Music
Organist ~ Georgianne Pravecek
Congregational Hymns
Honorary Casketbearers
MaryAnn’s Granddaughters
Active Casketbearers
MaryAnn’s Grandsons
MaryAnn Kloucek was born on June 4, 1923 to John and Edith (Pritzkau) Berndt on the Berndt family homestead in rural Avon, South Dakota. In 1941, she graduated from Avon High School. She went on to earn her teacher’s certificate from Southern State Teacher’s College in Springfield, South Dakota in 1942. For a time, she taught at local country schools. On December 14, 1946, MaryAnn was united in marriage to Glenn Parsons. Following Glenn’s untimely death in 1950, she once again taught in country schools.
On November 23, 1953, MaryAnn was united in marriage to Clement “Clem” Kloucek in Lesterville, South Dakota. Together they made their home on a farm southeast of Scotland. MaryAnn was a hardworking, lively farmwife and stay-at-home mother. She helped Clem where he needed on the farm as well as raising chickens, ducks, and geese and hand-milking their dairy cows. MaryAnn cared for her family in numerous ways, such as canning, baking, and sewing dresses for her girls. She also grew an abundant vegetable and flower garden. When their children were grown, MaryAnn returned to her calling as a teacher and worked at the Scotland Elementary School. In the late 1970s, Clem and MaryAnn moved into Scotland.
MaryAnn was an outgoing, feisty woman who made a perfect match with Clem. They loved to travel and through the years visited many places, such as Mexico, Hawaii, Jamaica, and wintering in Arizona. They also frequently camped at many Lewis and Clark area camping sites and even worked as attendants at Pierson Ranch.  They loved to visit and made innumerable friends throughout the years. MaryAnn was a good-humored, beloved wife, mother, grandmother, friend, and teacher.
Due to health issues, MaryAnn became a resident of the Good Samaritan Society in Scotland in August 2013. It is there that she passed away on Thursday, July 13, 2017 having attained the age of 94 years, 1 month, and 9 days.
She is survived and remembered by her adoptive daughter Carol (Dennis) Streyle of Scotland; daughter Ann Kinney of Deerfield Beach, FL; grandchildren: Becky Hanson (special friend Joshua Winther), Dennis Streyle Jr. (special friend Kristen Murray), Heidi (James) Waner, Scott Streyle, Melissa Kinney, Austin VanAsselt, Alex VanAsselt, Tanner VanAsselt, and Derek VanAsselt; son-in-law Tom VanAsselt of Colton, SD; siblings: Sophie (Ben) Winckler of Tyndall, Thelma Lind of Vermillion, and Cliff (Verna) Berndt of Avon; and several nieces and nephews.
She was preceded in death by her first husband Glenn Parsons in 1950, second husband Clem Kloucek in 2005, three infant sons, daughter Darla VanAsselt, her parents, brother Arnold Berndt, sister-in-law LaVerne Berndt, infant great-granddaughter Carolyn Kloucek-Uerich, son-in-law Peter Kinney, and brother-in-law Richard Lind.
To order memorial trees or send flowers to the family in memory of MaryAnn Kloucek, please visit our flower store.