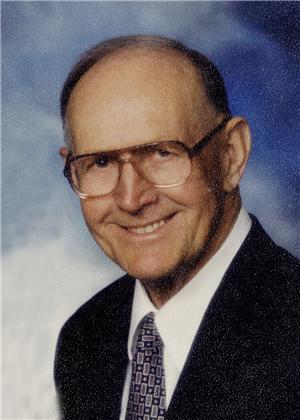 CLERGY
Rev. Greg Way
MUSIC
Organist ~ Shelly Finck
Congregational Hymns
"Bornin' Cry"
"How Great Thou Art"
CASKETBEARERS
Maynard's Grandchildren
and Great-Grandchildren
Maynard was born on March 31, 1924, to Samuel and Bertha (Schneider) Wiederrich south of Tripp, South Dakota.  He attended Emanuel Country School District 48 and graduated from Tripp High School in 1941.  On September 17, 1948, he married Evelyn Brunken in the Methodist Church in Tripp.  They farmed south of Tripp for 30 years before moving into town.  Maynard worked for Mormon Feed Company for ten years and then worked for RCIS, a division of Wells Fargo Bank, adjusting crop losses for farmers.  He loved meeting the farmers and working with other adjusters all over South Dakota, retiring at age 87.
Maynard served in the United States Army in World War II in Germany. He remained in Germany with the Army after the war ended for a period of time due to his ability to speak German.  Maynard was honorably discharged having attained the rank of sergeant.
Maynard was recognized with the Master Pork Producer Award in 1968 for his farrow to finish operation.  He was a member of the Tripp American Legion, Jelkin Harms Post 142.  He was baptized and confirmed in Immanuel Reformed Church, rural Tripp.  He was a member of Friedens Reformed Church where he served on the Consistory and a Pastor Search Committee.
Grateful for having shared his life are his children:  son Jim and wife Karri Wiederrich of Sioux Falls, granddaughters Anne, Lynn and Sara; son Jerry and wife Kristie Wiederrich of Sioux Falls, grandson Mike and his wife Aimee of Sioux Falls, great grandchildren Regen and Zach, grandson Matt and his wife Katie of Sioux Falls; daughter Donna Van Bockern and her husband Jim of Sioux Falls, grandchildren Emily and Ben; daughter Debra Jensen and her husband Gene of Yankton, South Dakota, grandson Neil and his wife Julia of Towson, Maryland, and grandson Forrest; Maynard’s sister, Lorene Jerke, of Tripp; and Maynard’s special friend Rose Novak of Tyndall.
Maynard was preceded in death by his wife Evelyn, one infant son and his parents.
Memorials in Maynard’s honor may be directed to Placerville Camp UCC, which hold a special place in the hearts of his grandchildren and great grandchildren, and the Tripp American Legion.
To order memorial trees or send flowers to the family in memory of Maynard  Wiederrich, please visit our flower store.