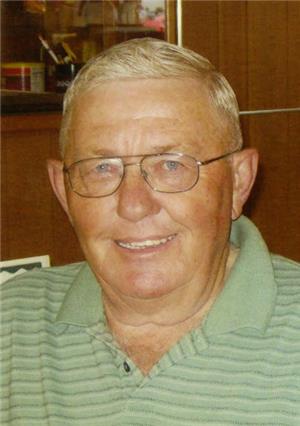 Clergy
Rev. Greg Way
Music
Organist ~ Karen Huether
Congregational Hymns
“In the Garden”
“How Great Thou Art”
“On Eagle’s Wings”
Casketbearers
Nathan Andersh
Josh Meisenhoelder
Brandon Meisenhoelder
Garrett Trevino
Jacob Trevino
Cody Koenen
Kenneth Meisenhoelder
Melvin Gilbert Meisenhoelder was born on June 9, 1939 to Herbert and Marie (Weisser) Meisenhoelder at Parkston, South Dakota. Following his graduation from Tripp High School in 1958, he joined the South Dakota National Guard. For 3 years, he worked the night shift on the construction of the Oahe Dam in Pierre, SD. On May 13, 1960, Melvin was united in marriage to Junellia Seeman in Luverne, Minnesota. In 1961, the couple made their home on the family farm in Tripp, SD. After serving 9 years in the SD National Guard, Melvin was honorably discharged.
For the majority of his life, Melvin drove truck for several local companies, such as Schmidt’s Supply and Mehlhaff Trucking. He loved to tell stories of driving truck and being on the road. Melvin could recall all the restaurants and truck stops that served great food on his travels, especially the best breakfast burrito he ever had at a food truck in Oklahoma. Upon his return home, he would surprise his kids with little trinkets and gifts.
He also managed his farm and raised cattle. In 1994, they bought the bowling alley in Tripp, Tripp Sport’s Bowl & Cafe. After retiring, they moved into Tripp and Melvin helped in the daily operation of the bowling alley. He enjoyed his time visiting with customers and sharing a good laugh.
Melvin was proud of his German heritage. As a child, they spoke in German until he began attending school. He enjoyed good food; especially his wife’s German home cooking. In his spare time, he also enjoyed watching old western movies. Melvin loved fishing. He was particularly fond of fishing for blue gill and crappies in the Tripp Lake and James River. For several years, he was a member of the Tripp Lake Association. Melvin loved animals and had several pets through the years. The first puppy he gave his family was a little Chihuahua named Mitzi that he carried home in his coat pocket. For a time, he even had a pet squirrel that would eat out of his hand.
Later in life, Melvin was blessed to become a grandfather and great-grandfather. He was incredibly fond of his grandchildren and thought the world of them.
Melvin passed away on Monday, April 29, 2019 at Avera Bormann Manor in Parkston, South Dakota having attained the age of 79 years, 10 months, and 20 days.
Melvin will be remembered by his wife of nearly 59 years Junellia Meisenhoelder of Tripp, SD; children: Tim (Gerri) Meisenhoelder of Phoenix, Arizona, Tammy (Craig) Haase of Sioux Falls, SD, Brian (Tami) Meisenhoelder of Tripp, SD, Kent Meisenhoelder of Tripp, SD, Sheri (Gene) Trevino of Rockford, Washington, and Kathy (Fred) Koenen of Rapid City, SD; 15 grandchildren; 7 great-grandchildren; and several step-great-grandchildren.
Melvin was preceded in death by his parents and stepfather, Emil Weisz.
This obituary was written by the Goglin Funeral Home on behalf of the Melvin Meisenhoelder family.
To order memorial trees or send flowers to the family in memory of Melvin Gilbert Meisenhoelder, please visit our flower store.