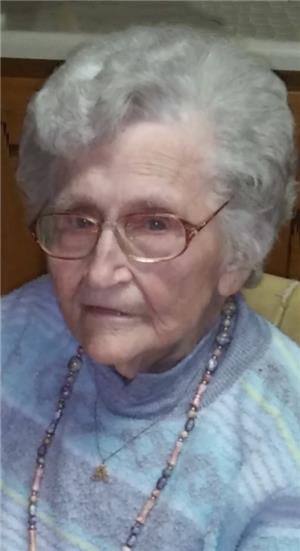 Meta (Reiner) Herr was born October 28, 1923 to Emil and Otilda (Gramm) Reiner on a farm south west of Tripp, South Dakota. She attended school through the eighth grade in Bon Homme County and three years of high school in Tripp, SD. She was baptized at the Reformed Church and confirmed on Easter Sunday April 1939 in the Reformed Church in Tripp, SD.

Meta Reiner was united in marriage to Alton A Herr September 19, 1941 south east of Tripp at her parents’ home. Alton and Meta farmed north east of Tripp, SD from 1941-1987 when they moved into Tripp, SD.

Meta was a faithful member of the Reformed Church. Meta and Alton helped with Meals on Wheels and Meta volunteered at the Tripp Good Samaritan Home in Tripp. Meta enjoyed her flowers and her garden. Above all she enjoyed praying, playing Pinochle and bingo with family and friends. Meta also enjoyed fishing with family.

The love of her life, Alton Herr passed away on April 20, 2002. They shared 61 years, 8 months and 1 day together. Meta continued to live in her home in Tripp. Meta had a stroke in October 2014. Meta’s daughter Carol Newton moved into Meta’s home and helped her until Meta went to her Heavenly Father on Friday, January 29, 2021 at Avera Bormann Manor in Parkston, SD at 97 years of age.

Meta was preceded in death by her husband Alton; her parents Emil and Otilda Reiner; her sister Noverna; her brothers Arland and Delmar Reiner and many aunts, uncles and cousins.

To order memorial trees or send flowers to the family in memory of Meta Herr, please visit our flower store.
Open