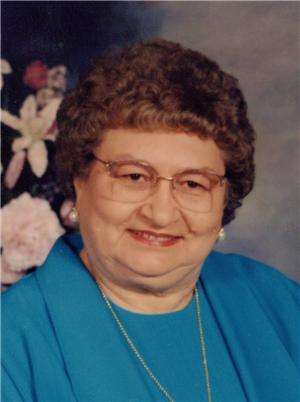 CELEBRANT
Fr. Joe Forcelle
MUSIC
Organist ~ Kathy Koenig
St. Leo Choir
Processional  ~ “Prayer of St. Francis”
Offertory  ~ “Come to Me”
Communion  ~ “On Eagle’s Wings”
Recessional ~ “How Great Thou Art”
CASKETBEARERS
Bob Bares
Tom Bares
Andrew Becvar
John Cuka
Don Hauck
Todd Taggart
Mildred Marie Herman was born Thursday, June 14, 1928 in Bon Homme County near Tyndall to Anton and Anna (Rezac) Bares. As a girl, she was active in 4-H and enjoyed raising calves. The family moved several times and she attended school in Springfield, Tyndall and Tabor. Mildred married Andrew Becvar on November 17, 1947 at Tabor.  They farmed five miles southwest of Tyndall. Mildred was a devoted farm wife, helping with everything that needed to be done on the farm and raising her family. She always grew a large garden and tended her many chickens. For 16 years, Mildred took care of Andrew, who had Parkinson’s disease. She ran the farm, raised their boys, and kept everything going. In 1978, she moved into Tyndall and worked for C.R. Industries in Springfield for a few years. Mildred married Raymond “Ray” Herman on May 29, 1983 at Lake Andes. She was a member of St. Leo’s Altar Society, the Catholic Foresters and was also a member of the VFW Auxiliary. She became a resident of the Good Samaritan Society of Tyndall in August of 2012. Mildred passed away on Thursday, December 27, 2012 at St. Michael’s Hospital Avera in Tyndall at the age of 84 years, 6 months and 13 days.
Grateful for having shared Mildred’s life are her three sons: Jim (Perri) Becvar of Omaha, Nebraska and Ken Becvar and Debbi Diede, who live on the family farm near Tyndall; a daughter-in-law, Sharon (Don) Hauck of rural Tyndall; a stepson, Richard (Phyllis) Herman of Vancouver, Washington; four grandchildren: Kris (Todd) Taggart of Yankton, Teresa (Matthew) Zatkoff, of Chicago, Illinois, Andrew Becvar and Meagan Becvar, both of Omaha, Nebraska; four great-grandchildren: Emma, Abby and Logan Taggart and Autumn Becvar; two step-grandchildren: Ben Herman and Natalie (Christopher) Wermus; two step-great-grandchildren: Oliver and Amelia Wermus; Debbi’s children and grandchildren: Matthew Diede of Sioux Falls and Stephanie (Jason) Tellinghuisen and Aidan, Tyler and Cole of Tea; a brother, Charles (Margaret) Bares and a sister, Mary Ann Cuka, all of Tyndall.
In addition to her parents, Mildred was preceded in death by both husbands, her son, Ron Becvar in 1994, a stepdaughter, Diane (Herman) Matthews, and a brother-in-law, Allen Cuka.
To order memorial trees or send flowers to the family in memory of Mildred Marie Herman, please visit our flower store.