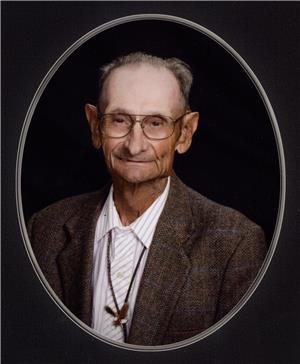 Myron Ochsner was born on October 28th, 1926 to Fred W. and Martha (Reister) Ochsner. He passed away February 8th, 2019 after a brief illness.
Myron was drafted during his senior year of high school and served in Korea and the Philippines. After his military service he returned to the family farm raising Hereford cattle for many years. He was a member of the Saddle Club, VFW, and Legion. He enjoyed bowling and fishing.
Myron is survived by his brothers Eldon (Marlene) and Kenny; and his nieces and nephews. He was preceded in death by his parents, brother Norman, and sister-in-law Dorothy.
The family would like to thank the staff of the Scotland Good Samaritan Center for their excellent care and for making Myron feel right at home.

To order memorial trees or send flowers to the family in memory of Myron Ochsner, please visit our flower store.