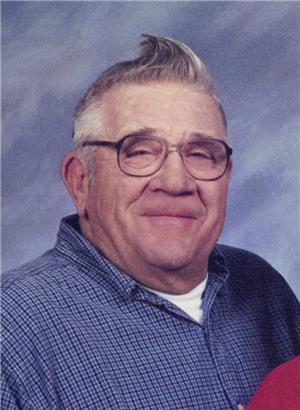 CLERGY
Rev. Aaron Rush
MUSIC
Pianist ~ June Finck
Special Music ~ Quartet
"How Great Thou Art"
"Amazing Grace"
Congregational Hymns
"Old Rugged Cross"
"Come Thou Fount of Every Blessing"
Honorary Casketbearers
Norman's Youngest Grandsons
Active Casketbearers
James Schultz
Hector Curriel
Harold Hokenstad
Nathan Terveen
Evan Schultz
Kalin Terveen
Norman Walter Berndt was born on November 26, 1934 to Walter and Martha (Hauck) Berndt on the family farm in rural Avon, South Dakota. As a young man, he helped on the farm with his family, which became his life-long career. On November 29, 1963, Norman was united in marriage to Eunice Namminga at Emmanuel Reformed Church in Springfield. Together they made their home on the Berndt homestead in rural Avon. Throughout his life, Norman was a diligent and successful farmer. He planted and harvested countless crops of beans, corn, and wheat with his CASE-International tractors. Through the years, the hard-working couple raised Angus cattle, pigs, chickens, geese, and ducks for butcher as well as milking their Holstein cows.
Even if he had no immediate reason to go, Norman could find an excuse to attend the local auctions or spend time at the Avon sale barn. His day wasn’t complete unless he was able to make his visiting rounds. Through the years, he became a regular at the Tyndall Barber Shop, Avon salebarn, Tripp Lunchbox, Tripp Bowling Alley, and basically anywhere within the general area that could serve a good cup of coffee and held the potential for conversation. Doesn’t matter where he was or what was going on, but Norman could initiate a conversation and make friends out of strangers within a few minutes of chatting. Even though Norman wasn’t always able to attend his 4+ coffee stops a day, he still remained one of the most well-informed on local happenings and going-ons thanks to his active watch of the HWY 37-46 intersection. Quite often, he not only was aware of the news, but even part of it. Norman opened his home so often to the individuals whose cars broke down, got stuck in the snow, fell empty on gas, etc. that the family set out a guestbook for newcomers to sign.
Norman took most things in stride with his good humor and a strong opinion. He loved fishing, but was blessed with only the knack to catch bullheads and carp. Norman was generally in a good mood, and never passed up the opportunity to jokingly tease. Much to his daughters’ dismay, Norman passed down his skills and taught his grandchildren his tricks.
He was also a strong Christian. It was very important to him that upon their marriage, Eunice and him attend the same church and raise their children in the Christian faith. Even as adults, rarely would a Sunday go by that Norman didn’t call his children up and check on their attendance. Norman was a dedicated member of the Danzig Baptist Cemetery Committee for several years. He regularly helped out with the ground’s maintenance and kept a vigilant eye on the cemetery’s condition.
Norman passed away on Wednesday, January 20, 2016 at Dougherty Hospice House in Sioux Falls, South Dakota at the age of 81.
Grateful for the assurance of seeing him again one day are his wife Eunice Berndt of rural Avon; daughters: Marcia (James) Schultz of Chillicothe, IL, Ruth Ann (Hector) Curriel of Sioux Falls, Janice (Harold) Hokenstad of Sioux Falls, and Nancy (Nathan) Terveen of Sioux Falls; grandchildren: Allison, Evan, Seth, Luke, Micah, and Laura Schultz, Audrey, Cora, and Kyle Hokenstad, Kalin, Blake, and Layton Terveen, MiyaJae Dubs, and another little boy on the way; and sister Clara (Don) Bitterman.
He was preceded into Heaven by his parents, sister Lorraine and brother-in-law Willie Schempp, and granddaughter Emily Schultz.
To order memorial trees or send flowers to the family in memory of Norman W. Berndt, please visit our flower store.