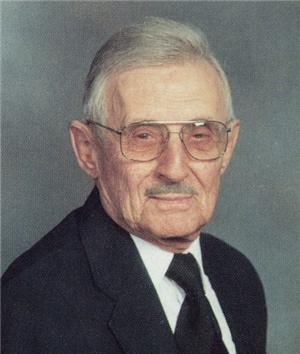 CELEBRANT
Rev. Fr. Gerald Thury
MUSIC
Organist ~ Marcene Kniffen
St. Leo Choir & Congregation
Processional ~ "I Will Raise Him Up"
Offertory Hymn ~ "Just a Closer Walk With Thee"
Communion Hymn ~ "Amazing Grace"
Recessional ~ "How Great Thou Art"
CASKETBEARERS
Larry Kniffen
Robert Kortan
James Leheska
Steven Leheska
Tracy Mach
Greg Schneider
Norman A. Leheska was born on Tuesday, August 24, 1920 at Bijou Hills, South Dakota to Anton C. and Helen (Cepal) Leheska. He graduated from Kimball High School in 1939. He worked for the Kimball newspaper as a linotype setter and also played both alto and tenor saxophone in a dance band. Norm served in the U.S. Army and was stationed at Camp Livingston, Louisiana, where he married Delores “Bonnie” Bonner on May 24, 1943.  Following his military service, Norm attended a watchmaking school in Kansas City. The mayor of Tyndall at the time encouraged him to move to Tyndall and open a jewelry store. He and Bonnie moved to Tyndall and he opened the store where he sold and repaired watches and other jewelry. He also did wedding photography in the Tyndall area. With the advent of digital timepieces, Norm closed the shop in Tyndall and went to work as a linotype setter for the Tyndall Tribune. Later, he went to work for BY Electric as editor and publisher of the “BY Lines.” He also helped with meter reading, electrical wiring and worked with the line crew during storms. Following his retirement, Norm and Bonnie spent time travelling. He and Bonnie preferred to spend their time in each other’s company, taking care of their home. Norm was very creative and loved to tinker with many useful innovations around the house. He loved to sing and had a wonderful voice. Following Bonnie’s death, Norm enjoyed singing with the St. Leo Choir. Norm passed away on Saturday, June 11, 2011 at St. Michael’s Hospital Avera in Tyndall, having attained the age of 90 years, 9 months and 18 days.
Norm is survived by his friends; three cousins: Imy (Leheska) Haase of Mitchell, Bernice (Leheska) Nemanic of Sacramento, California, and Alta (Leheska) Wade of Rapid City; a cousin-in-law, Lorraine Leheska of rural Chamberlain; and many second cousins.
He was preceded in death by his parents, Anton and Helen Leheska, an infant brother, and his wife, Bonnie Leheska.
To order memorial trees or send flowers to the family in memory of Norman A. Leheska, please visit our flower store.