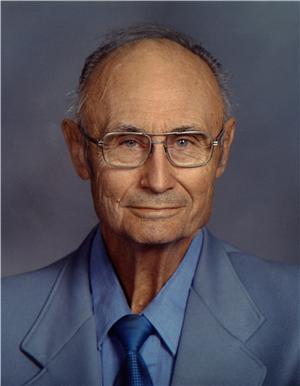 CLERGY
Rev. Ron Shifley
CASKETBEARERS
Charlie Deutscher
Paul Weidenbach
Marvin Thum
Todd Cotton
Richard Buechler
Jake Moorman
MUSIC
Organist ~ Sharon Orth
Special Music by Lori Suess
"I'll Fly Away"
Congregational Hymns
"How Great Thou Art"
"Jacob's Ladder"
Orville “OB” Edmond Buechler was born on Monday, July 18, 1927 near Lesterville, South Dakota to Edmond and Johanna (Deutscher) Buechler. He was baptized August 21, 1927. He graduated Scotland High School in May, 1946. Orville was united in marriage to Gladys Stoebner in June of 1948 in the Reformed Church in Tripp. After attending Southern State College in Springfield, South Dakota where he learned the art of woodworking, they farmed together south of Scotland. He was later united in marriage to Betty Zinck in June of 1972 at the Little Brown Church in Vale, Iowa. For a time, he sold fertilizer for Symmer’s out of Sioux Falls. Orville was an avid square dancer, and this passion gave them the opportunity to travel. They wintered in Arizona for many years and went on Hawaiian and Caribbean cruises. Orville was a natural leader and took part in many organizations: the Scotland School Board from 1980 to 1983, Scotland Community Choir for 25 years, charter member of the National Cattlemen’s Association, and Scotland EMT for 10 years. He was also a member of the Scotland Sportsmen’s Club and organized his own bowling team. Orville not only loved farming, woodworking, and square dancing, but also entertaining. He took pride in preparing a good meal and enjoyed sharing food and conversation with friends and family. Orville died on Monday, May 6, 2013 at the Good Samaritan Society of Scotland at the age of 85 years, 9 months and 18 days.
Grateful for having shared Orville’s life are his son, Lynn Buechler of Scotland; two grandchildren: Toni (Chad) Haberman of Fordice, Nebraska and Casey Sommer Buechler of Yankton; six great-grandchildren: Kaylee, Dylan, Ethane, and Seth; and his sister, Florence Hauck of Menno.
In addition to his parents, Edmond and Johanna Buechler, Orville was preceded in death by his wife, Betty in 2001, a daughter-in-law, Charlotte in 2012, and a brother-in-law, Raymond Hauck in 1995.
To order memorial trees or send flowers to the family in memory of Orville "OB" Edmond Buechler, please visit our flower store.