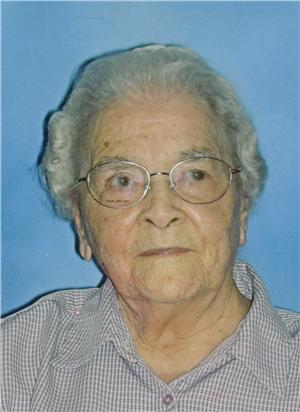 CLERGY
Rev. Greg Way
CASKETBEARERS
Kim & Kelly Gregg
Denae Pearce
Jeff Schnabel
Elisa & Bruce Maul
MUSIC
Organist ~ Ruby Dewald
Soloist ~ Lennis Mehlhaff
“How Great Thou Art”
Congregational Hymns
“Amazing Grace”
“In The Garden”
“What a Friend We Have in Jesus”
Otilia Elisabeth Schnabel was born Sunday, November 25, 1917 in Charles Mix County near Delmont to William and Elisabeth (Klein) Denke. She attended the country School through the 8th grade. Otilia was united in marriage to Albert “Red” Schnabel on November 25, 1937 near Delmont. They farmed northeast of Tripp for 40 years. During that time, she worked at the Dairy Queen in Tripp for several years. After moving into Tripp in 1977, she worked for a couple of years as a cook at the nursing home. While on the farm, Otilia kept a large garden. Her other talents included crocheting, quilting and sewing. She was skilled at sewing and repairing and was able to repurpose just about anything and make things last. Otilia was a member of Frieden’s Reformed Church in Tripp where she served faithfully in the women’s guild. This year marked her 60th anniversary in the guild, where she had held several offices, including president. Otilia passed away on Friday, August 30, 2013 at the Good Samaritan Society of Tripp, having achieved the age of 95 years, 9 months and 5 days.
Otilia is survived by her son, Derald (Sharon) Schnabel of Tripp; six grandchildren: Kim (Kelly) Gregg, Denae (Todd) Pearce, John (Yamaya) Schnabel, Jeff Schnabel, Elisa (Bruce) Maul, and Nick (Deanne) Schnabel; eight great-grandchildren; a brother, Norman (Sherry) Denke of Rapid City; and a daughter-in-law, Jane Schnabel of Moorehead, Minnesota.
Otilia was preceded in death by her husband, Albert Schnabel; two sons: Dale (Barbara) Schnabel and Orville Schnabel; a grandson, Kip Schnabel; her parents, William and Elisabeth Denke; two sisters: Iona Eisenbraun and Velma Schaefer; and two brothers: Lester Denke and Victor Denke.
To order memorial trees or send flowers to the family in memory of Otilia Elisabeth Schnabel, please visit our flower store.