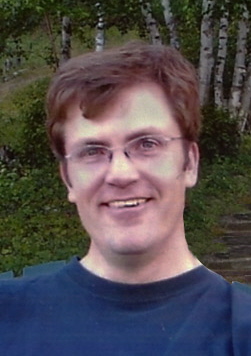 CLERGY
Rev. Ron Shifley
Paul Marvin Neth was born on Thursday, December 9, 1965 to Marvin and Lois (Blaufuss) Neth at Tyndall, South Dakota. Paul graduated from Scotland High School in 1984 and was active at Scotland United Church of Christ and in 4H. He graduated from SDSU in 1988 with degrees in Engineering Physics and Computer Science. Paul married Laura Buckwalter on June 23, 1989. They moved from Sioux Falls to Las Vegas, Nevada in 1990.  In 1992, they moved to the Denver, Colorado area, living for seven years in Aurora, Colorado. In 2000, they moved from Aurora to Eagan, Minnesota where Paul worked for NACR (North American Communications Resource) and Univita, where he was a Database Administrator. He left there in August of 2010 due to his disability. He was active in the Huntington's Disease Society of America's local chapter and support group and assisted in the planning of the Huntington's Disease Society of America's (HDSA) national convention in Bloomington, Minnesota in 2011. He was an avid golfer and woodworker. Paul was a lifelong fan of the Denver Broncos and was especially happy to live in Colorado when the Broncos won back-to-back Superbowls. Paul passed away on Thursday, July 5, 2012 at his residence in Minneapolis at the age of 46 years, 6 months and 26 days.
Paul is survived by his son, Michael Paul Neth of Eagan, Minnesota; his mother and stepfather, Lois (Gerard) Hehn of Sioux Falls; sister Janelle (Wayne) Hesman of Doniphan, Nebraska;  sister-in-law, Kim Neth of Scotland; three nieces: Jenna Neth of Watertown, and Megan and Kaitlyn Hesman of Doniphan, Nebraska; and his former wife, Laura Neth of Eagan, Minnesota.
He was preceded in death by his father, Marvin Neth, and his brother, Richard Neth.
Paul’s family prefers memorials to HDSA, the Huntington’s Society of America
To order memorial trees or send flowers to the family in memory of Paul Marvin  Neth, please visit our flower store.