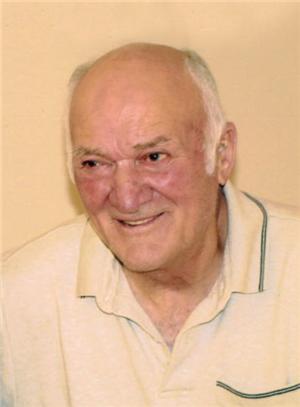 CLERGY
Rev. Gregory Way
MUSIC
Organist ~ Ruby Dewald
Soloist ~ Katie Winckler
“Homeward Bound”
Special Music by LeAndra Mogck
Congregational Hymns
“In the Garden”
“Rock of Ages”
HONORARY CASKETBEARERS
All of Ray’s Grandchildren, Great-
Grandchildren, Nieces and Nephews
CASKETBEARERS
Mark Reischl
Craig Winckler
Charlie Winckler
Michael Bouza
Ryan Bouza
Jacob Bouza
Jake Johnson
Ray Eugene Bouza was born on Thursday, November 15, 1934 in Charles Mix County near Geddes, South Dakota. His parents were Gordon and Anna (Hakl) Bouza. He graduated from Geddes High School in 1952. After high school, he farmed on the family farm until enlisting in the U.S. Army. He served from 1955-1958 and was stationed in Germany. Ray met Mary Ellen Haeffner at Rest Haven in Lake Andes, where they spent many hours roller skating. They were united in marriage on August 26, 1958 at Tripp. They farmed near Geddes for 3 years, then moved to Tripp in 1962. Ray worked at Mobile Service for 1½ years, and the Tripp Grain Elevator for 9½ years. He then began working on road and dirt construction, and worked for Commercial Asphalt in Mitchell for 16 years. He later worked at Alco in Yankton for 8 years, and retired in July of 2000. They were members of the United Methodist Church in Tripp for many years until its recent closing, when they became members of Frieden’s Reformed Church. Ray loved hunting and fishing, especially with his grandkids and great-grandkids. Ray recently moved to Brookings and lived there until the time of his death. He passed away on Friday, December 30, 2011 at Sanford USD Medical Center in Sioux Falls, having attained the age of 77 years, 1 month and 15 days.
Ray’s memory will be cherished by his four children: Daniel (Renee) Bouza of Yankton, Joseph (Rhonda) Bouza of Scotland, Diane (Tim) Eichstadt of Norfolk, Nebraska, and Donald (Jenny) Bouza of Sioux Falls; nine grandchildren: Sara, Ryan, Jacob, Angie, Josie, Megan, Holly, Michael and Joe; ten great-grandchildren; a sister, Delores Hakl of Lake Andes; two brothers: Gordon (Phyllis) Bouza of Boise, Idaho and Larry (Arlene) Bouza of Omaha, Nebraska; a sister-in-law, Sue Bouza of Omaha, Nebraska; and special friend, Barbara Rhody of Brookings.
In addition to his parents, Ray was preceded in death by his wife, Mary Ellen, in May of 2010, and a brother, Duane Bouza.
To order memorial trees or send flowers to the family in memory of Ray Eugene Bouza, please visit our flower store.