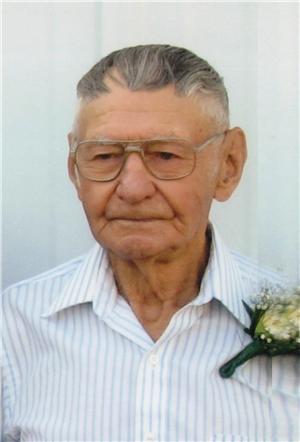 CELEBRANT
Fr. Joe Forcelle
MUSIC
Organist ~ Kathy Koenig
LECTOR
Jim Kniffen
GIFT BEARERS
Danielle and Brittany Tycz
CASKETBEARERS
Brandon Carda
Ross Carda
Tyler Tycz
Sarah Carda
Brittany Tycz
Christina Martinez
Raymond Eldon Carda was born on Friday, December 12, 1919 to Anton and Albina (Vellek) Carda in Tyndall, South Dakota. He attended country school through the 8th grade at which time he loaded up his Model A pickup and drove to California where he worked picking fruit. Later he enlisted in the military and was stationed in Alaska as he served in the medical field alongside doctors. On July 14, 1946, Ray was united in marriage to Dorothy Kriz at St. Leo Catholic Church in Tyndall. For a time, he owned and operated a bar named “The Past Time” in Wagner until he began farming north of Tyndall. Ray retired from farming in 1972 and began working for St. Michael’s Hospital as a janitor. In 1975, Ray and Dorothy moved to Avon where he opened a bar for one year. Upon moving back to Tyndall, Ray worked at the Springfield College until its closing in 1984 at which time he began to enjoy a semi-retirement. Ray loved gardening and fishing and devoted many cherished hours in pursuing these hobbies his entire life.
Ray died on Saturday, April 19, 2014 at his residence in Tyndall having attained the age of 94 years, 4 months, and 7 days.
He is survived by his wife of 67 years, Dorothy Carda of Tyndall; four children: Dennis Carda of Tabor, Jerry (Diane) Carda of Lead, Jeff (Lisa) Carda of Crofton, NE, and Cindy (Dennis) Tycz of Tyndall; ten grandchildren; and two great-grandchildren.
He was preceded in death by his parents, Anton and Albina Carda, his daughter Katherine in infancy, and four brothers: Adolph, Steve, Lawrence, and Ed.
To order memorial trees or send flowers to the family in memory of Raymond Eldon Carda, please visit our flower store.