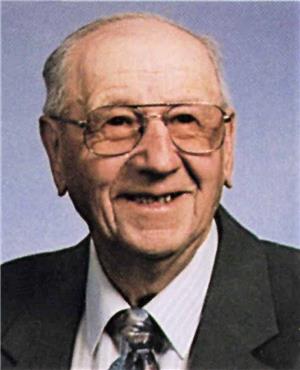 Raymond Schneider, age 103, passed away peacefully on Wednesday, May 19, 2021. Ray was born in Scotland, South Dakota, on January 20, 1918. He was a farmer all of his life. After he sold his farm and moved to town, Ray was a familiar sight in Scotland as he made his way on his tractor to mow lawns.

Ray was predeceased by his parents, Agnes and Albert Schneider, his sisters, Helen Schneider Spielhagen and Vlasta Schneider Malle, and the love of his life, Erna Dangel, who died on April 24, 2020. In his final days, Ray said he was looking forward to seeing Erna again.

Ray spent his entire life in Scotland, with a few trips to New York to see family. He lived a rich and full life that spanned over a century, having witnessed the events that have defined our national experience. In the months prior to his death, he recorded his remembrances of attending a one-room school house in a series of interviews with his nephew, Gerard, with the plan that those recollections will be part of a children’s book about life on the farm.

To order memorial trees or send flowers to the family in memory of Raymond  Schneider, please visit our flower store.