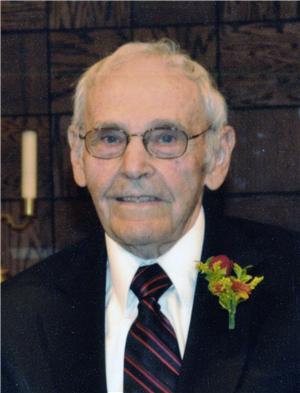 CLERGY
Rev. Ron Shifley
MUSIC
Organist ~ Shirley Orth
Congregational Hymns
“To God Be the Glory”
“Leaning on the Everlasting Arms”
“Jesus Will Outshine Them All”
CASKETBEARERS
Richard’s Grandsons
Timothy Hoyt
Adam Hoyt
Nathan Anderson
Joel Merkwan
Tobias Gall
Andrew Gall
Richard Albert Gall was born on Tuesday, June 13, 1922 at Lesterville, South Dakota to Emil Ferdinand and Johanna Elizabeth (Auch) Gall.
He went to school through the 8th grade at the Northstar School near Lesterville. Richard left home at age seventeen to work on a farm in Illinois. He later worked in a battery factory until enlisting in the U.S. Marine Corps on March 31, 1943. He completed basic training at San Diego, California then went overseas with the 3rd Armored Amphibious Battalion. Richard saw action at Pelelieu Islands and Okinawa during World War II. After his honorable discharge on December 24, 1945, he returned to South Dakota and farmed with his father on the family farm eight miles southeast of Scotland, near Lesterville.
Richard was united in marriage to Arlene Wollman on October 7, 1951 at the Emmanuel Lutheran Church in Menno, South Dakota. While farming and milking cows, he was meticulous in the care of his equipment and machinery. Other than necessary chores, he never worked on Sundays. Richard was a faithful member of the United Church of Christ in Scotland, and served in various offices of the church.
As a youth, Richard enjoyed playing baseball. Later in life he enjoyed being a spectator at local sporting events and was a dedicated Twins and Vikings fan. While still on the farm, he liked to go bowling. He enjoyed golfing and fishing and having coffee with his friends. Richard was a member of the Scotland VFW. One of the most memorable experiences of his life was being a recipient of a trip with two of his brothers, also WWII veterans, to Washington, D.C. as a part of the “Honor Flight” program. Richard passed away at his home in Scotland on Saturday, February 16, 2013, having attained the age of 90 years, 8 months and 3 days.
Grateful for having shared Richard’s life are his wife of 61 years, Arlene Gall of Scotland; three children: Bonnie (Curt) Hoyt of Whiteclay, Nebraska, Rodney (Teresa) Gall of Yankton, and Randal Gall of Yankton; six grandchildren: Timothy (Tarah) Hoyt, Tobias (Kari) Gall, Valerie (Joel) Merkwan, Angela (Nathan) Anderson, Adam Hoyt and Andrew Gall and fiancé Chelsa; five great-grandchildren: Kloe and Oakley Gall, and Benjamin, Hannah and Elijah Merkwan; three brothers: Aldon (Esther) Gall of Scotland, Marvin Gall of Lake Andes and Emil (Betty) Gall of Columbia, South Carolina; four sisters: Olive (Eugene) Wollman of Menno, Eileen (Joseph) McIntyre of Las Vegas, Nevada, Delores Nelson of Yankton and Marjorie Novak of Mitchell; three sisters-in-law: Doris Gall, Geneva Gall and Betty Gall; as well as numerous nieces and nephews.
Richard was preceded in death by his son, Steven Gall; his parents, Emil and Johanna Gall; and three brothers: Raymond, Clifford and John Gall.
To order memorial trees or send flowers to the family in memory of Richard Albert Gall, please visit our flower store.