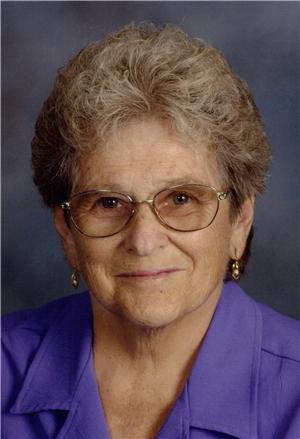 CLERGY
Rev. Dean Schroeder
MUSIC
Organist ~ Melissa Bruna
Soloist ~ Lisa Knoll
HONORARY CASKETBEARERS
Ruby’s Grandchildren
CASKETBEARERS
Roger Kriz
Mike Beyer
Rick Johnson
Mike Bame
Duane Rothschadl
Ron Kulish
Ruby Joan Kriz was born on June 3, 1932 near Tripp, SD to Henry and Helena (Winckler) Hahn. She was baptized on June 26, 1932 & confirmed on June 9, 1946. She graduated from Tripp High School in 1950. Prior to her marriage, she worked at the Tripp Mercantile. Ruby married Donald A. Kriz on June 26, 1952.  They farmed north of Tyndall until 1985, when she and Don moved to Tyndall. She worked at the L&R Café in Tyndall. Two of her greatest joys in life were her faith in the Lord and the time she spent in her yard, caring for His creations. Ruby will be most remembered for her wonderful sense of humor and her love of family. Ruby enjoyed bowling, gardening, reading, quilting, baking, dancing, and most important spending time with her family. She was a member of St. John’s Lutheran Church and served on the boards of the Czech National Cemetery and the Czech Heritage Society. She passed away on Wednesday, August 24, 2011 at St. Michael’s Hospital, having attained the age of 79 years.
Grateful for having shared Ruby’s life are her son, Gary (Diane) Kriz of Tyndall and their children Ryan, Jay and Jody; her daughter, Debra (Calvin) Buchholz of Springfield and their children Hannah and Jared; one sister, Helen (Roy) Kriz of Sioux Falls; two nieces: Cynthia (Rick) Johnson and their children, Sarah, Tyler and Alex, and Karen (Mike) Beyer and their children, Keaton and Karson; and a nephew, Roger (Leanne) Kriz and their children, Nick and Stacey.
Ruby was preceded in death by her husband of 53 years, Don, on March 26, 2005, her parents, a great-nephew, Cody, and many aunts & uncles.
To order memorial trees or send flowers to the family in memory of Ruby Joan Kriz, please visit our flower store.