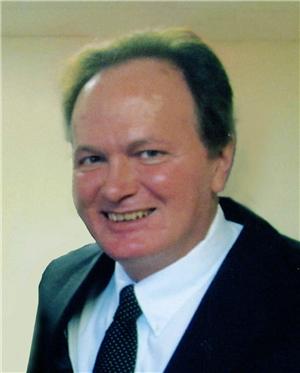 CLERGY
Rev. Greg Way
MUSIC
Organist ~ Ruby Dewald
Soloist ~ Lennis Mehlhaff
“How Great Thou Art”
Congregational Hymns
Processional ~“My Faith Looks Up To Thee”
Recessional ~ “God Be With You ‘Til We Meet Again”
CASKETBEARERS
John Ames
Rick Ames
Wayne Ames
Emilia Barton
Leland Barton
Trevor Barton
Steven Henry Schatz was born Saturday, June 21, 1958 at Mitchell, South Dakota. He died Sunday, March 17, 2013 at his home in New Haven, Indiana of a sudden massive heart attack.
He was born to Rev. James and Sarah (Ames) Schatz, the first of their four children. He was baptized at the Alpena, South Dakota Congregational Church. He was confirmed at the Plymouth Congregational Church in Fort Collins, Colorado. He was active in the church and enjoyed working with the youth programs. He graduated from Rocky Mountain High School at Fort Collins. Steve attended the School of Mines at Golden, Colorado where he received his degree in Metallurgical Engineering. He worked as a Metallurgical Engineer at the Woodward Governor Company at Fort Collins for many years. In 1993, he moved to New Haven, Indiana near Ft. Wayne where he worked at Navistar International until his early retirement last fall. He was planning on moving to Tripp and had purchased a house which he enjoyed restoring during his visits to Tripp.
Steve was married to Patricia Moriarty five years. They had no children. He enjoyed working in his yard and garden and enjoyed backyard barbequing for his friends. He enjoyed fishing and was a fan of all the sports. He especially liked watching the Minnesota Twins play and would sit with his father at the nursing home and watch sports games together whenever he visited Tripp. His hobby was buying and selling stocks on the computer. He was a very kind and generous man and will be sadly missed by his family and friends.
He was a member of the Plymouth UCC Church at Ft. Wayne and had planned to join Friedens Reformed Church after moving to Tripp.
He is survived by his mother, Sarah Schatz of Tripp; two sisters: Kathleen Barton of League City, Texas and Susan (Dave) Mueller of Nampa, Idaho; one brother: Tom (Amey) Schatz of Tripp; six nephews and nieces: Emilia, Leland and Trevor Barton of League City, Texas, Kennedy and Gracey Schatz of Tripp and Sam Mueller of Nampa, Idaho; a good friend, Jeannie Vogel of Ft. Wayne, Indiana; and several uncles, aunts and many cousins.
He was preceded in death by his father three months ago, his paternal and maternal grandparents, ten uncles and four aunts.
To order memorial trees or send flowers to the family in memory of Steven  Henry Schatz, please visit our flower store.