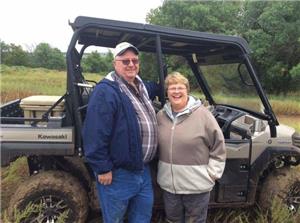 Terry Simantel was born September 23, 1947 to Maurice and Crystal (Bohner) Simantel of Scotland, SD, graduated from Scotland High School in 1965, went on to Universal Trades School in Omaha NE graduating in 1966. In 1966 Terry joined the Army National Guard in Springfield, SD where he served until 1974. He worked for Shorty Sear as a mechanic, City of Scotland maintenance, Soukup Construction and COOP Farmer Assn. Scotland.

January 14, 1968 Terry married Diane Hamberger with whom he shared 52 years. They had two boys Chad Alan and Christopher Lee.

While working at COOP he also enjoyed being the mechanic on a race car with driver Dale Schlecter Farmland Industries North Dakota and in 1979 moved home to his love of farming. Along with farming he also sold seed corn, worked in the parts department for Mesman Farm Supply in Springfield, SD, did construction and wood working for family and friends, building anything from garages to furniture and cabinets and finally as a crop adjuster until retirement.

Terry had many hobbies and loves in his life, starting from his younger days in 4H and FFA showing livestock in many events. As he grew older his interest turned to motorized vehicles and oh the stories that have been told about those days, anything from cars to motorcycles to snowmobiling on weekends with neighborhood friends and kids. Terry loved NASCAR Racing and traveled to many races with Diane and friends.

Terry enjoyed hunting with the neighbor group for many years and passed that love down to his kids and grandkids as they grew older. In his later years his love turned to camping and riding his side by side on trails across the state, along with spending time with his kids and grandkids, giving rides at the drop of a hat for any grandchild that would ask. Terry went from the wrench turner to the wrench director, helping family and friends any way he could.

Terry’s biggest and most precious love in life were his family. His heart was the biggest thing about him and everyone that he visited with knew how proud he was of every single one in his family.

Terry, passed away Monday, December 14, 2020 at Avera McKennan Hospital in Sioux Falls, SD at the age of 73.

To view the tribute video of Terry Simantel, please use the link https://www.tributeslides.com/tributes/show/PZD5Q5...

To order memorial trees or send flowers to the family in memory of Terry Lee Simantel, please visit our flower store.
Open