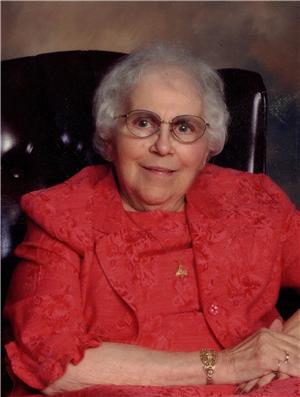 CLERGY
Rev. Greg Way
MUSIC
Organist ~ Shelly Finck
Processional Hymn ~  Congregation
“Abide With Me”
Hymn ~ Congregation
“I Was There To Hear Your Borning Cry"
Solo ~ “Psalm 121” ~ Scott Mehlhaff
Recessional Hymn ~ “What A Friend We Have In Jesus”
CASKETBEARERS
Velda's Grandchildren
Velda Edna Mehlhaff was born on Monday, March 5, 1928 on the Frey homestead to Emanuel and Louise Frey (Weisser). Velda was baptized into the Reformed faith on April 6, 1928 and confirmed on June 5, 1942.  She graduated from the 8th grade at Lake Point. On April 3, 1949, she married Ruben Mehlhaff. They were blessed with three children: Sharon, Roger and Scott. Velda helped Ruben on their farm southwest of Tripp. She enjoyed raising chickens, ducks and geese. After Ruben died on April 3, 1987, she moved to Yankton where she worked at the Sacred Heart Daycare, making doughnuts at Sunshine Foods, and cleaning homes. In 1999, she moved to the Pine Lane Assisted Living Center, and in 2001 she moved to the Springfield Assisted Living Center. When her health began to decline, she wanted to move “back home.” On May 26, 2005, she became a resident of the Good Samaritan Society of Tripp and enjoyed her remaining years there. Each day she looked forward to her favorite activities of Bingo, bowling, singing, polka music and laughing. She loved to watch birds and cardinals fascinated her. Each day was made complete by wearing jewelry and eating chocolate.  Velda looked forward to visits from family and was especially delighted when she could beat Grant or Katriana at a game of Uno. Her birthday each year was a big celebration to her and she always requested pepperoni pizza for her birthday meal.  Velda was a member of the Frieden’s Reformed Church and also a member of the American Legion Auxiliary. She passed away on Thursday, June 30, 2011, having attained the age of 83 years, 3 months and 25 days.
Thankful for sharing her life are her three children: Sharon Brandt and husband, Doug, of Avon, Roger Mehlhaff and wife Gail of Tripp, and Scott Mehlhaff and wife Chris of Detroit Lakes, Minnesota; nine grandchildren: Gregg Brandt, Kim Boettcher, Corey Mehlhaff, Brian Brandt, Julie Galloway, Sheila Brandt, Jill Nuebel, Katriana Mehlhaff and Hans Mehlhaff; eight great-grandchildren; a sister, Arlene (LaVern) Schaefer of Tripp; three sisters-in-law: Adaline (Maynard) Dewald of Tripp, Elaine Mehlhaff of Freeman and Darlene Weisser of Wagner; and many nieces and nephews.
Those who preceded her in death are her parents, Emanuel and Louise; her stepfather, Paul Weisser; husband Ruben; a brother, Harvey Weisser; a sister, Shirley Bloch; five brothers-in-law: Frank Bloch, Herbert Mehlhaff, Paul Mehlhaff, Edwin Mehlhaff, and Otto Guthmiller; and a sister-in-law, Wyona Guthmiller.
To order memorial trees or send flowers to the family in memory of Velda E. Mehlhaff, please visit our flower store.