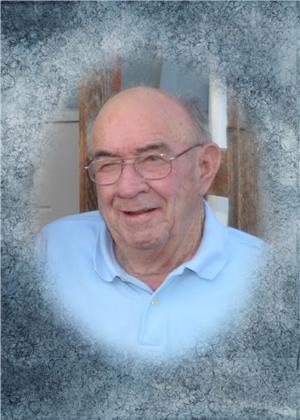 CLERGY
Rev. Brian Lemcke
MUSIC
Organist ~ Sonia Will
Congregational Hymns
CASKETBEARERS
Nicolas Goehring    Tyson Goehring
Steve Schiller    Jon Coler
Jason Starr    Jim Wermers
Vern Victor Goehring was born on the family farm near Delmont on October 25, 1927. He was the second child of Eugene and Louise (Dewald) Goehring. Vern grew up in the Delmont area and started farming with his dad at an early age. Vern was united in marriage to Doris (Lehr) on November 4, 1948 at the Emmaus Lutheran Church in Tripp, SD. They started their married life on a farm just north of Delmont and were blessed with two sons and 69 years of marriage. In 1978, they moved into Delmont and Vern continued to farm with his two sons. In his free time, he began designing many wood projects with his scroll saw and restoring antique tractors. Along with his interest in antique tractors, he became a member of the Twin Rivers Old Iron Association in Delmont. During the winter months, Vern and Doris spent their time touring the southern states and eventually called Texas home during the winter.
After the Delmont tornado destroyed their home in 2015, Vern and Doris moved to Countryside Living in Mitchell, SD. Vern suffered from a long battle with dementia. He was admitted into Firesteel Nursing Home in December 2017 and passed from complications of the disease on Sunday, January 21 at the age of 90.
He is survived by his wife, Doris (Lehr), and two sons, Terry (Lexine) Goehring and Thomas (Debra) Goehring both of Delmont, five grandchildren, six great-grandchildren, and one sister, Phyllis Leischner of Parkston, SD, and one sister-in-law, Luella Lehr of Tripp, SD. He was preceded in death by his parents, two brothers, Maynard and Sheldon, two brothers-in-law, Clarence Lehr and Guertis Leischner, one sister-in-law, Arleen, and one nephew.

one hour prior to service
To order memorial trees or send flowers to the family in memory of Vern Goehring, please visit our flower store.