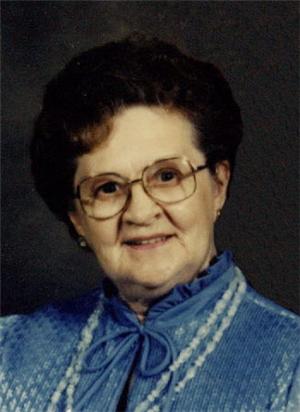 CLERGY
Rev. Jonathan Vehar
MUSIC
Organist ~ Dorothy Bietz
Solo ~ Linda Kronaizl
“I Heard the Voice of Jesus Saying”
Congregational Hymns
“In the Garden”
“Sweet Hour of Prayer”
CASKETBEARERS
Chad Krieger
Mike Krieger
Gary Kuchta
James Long
Robert Sunderman
Pat Barrett
Viola Susie (Sunderman) Auch was born on Valentine’s Day, February 14, 1919 to Martin and Emma Sunderman near Kaylor, South Dakota. She grew up on the family farm south of Scotland and attended country school as a child. In Milwaukee, Wisconsin, Viola met Ed Krieger and they were united in marriage with four children being born to this union: Ilene, Shirley, Allen, and Dennis. Ilene and Dennis passed away in childhood. After a time, Viola and her children moved back to Scotland. She worked at the Scotland Clinic for several years, until she began to work for Leighton Gemar at Gemar’s Market at which time she met Allo. On June 16, 1956, she was united in marriage to Allo Auch in Scotland. Together, they enjoyed traveling and spoiling their grandchildren, Chad and Michael. Viola retired in 1984, after working as a psychiatric aide at the Human Services Center in Yankton for 18 years.
Throughout her life, Viola enjoyed playing cards with friends. She was also very talented in her knitting and crocheting, sharing much of her fancy work with family and friends. Her interest in family genealogy kept her traveling to various parts of the country collecting family memorabilia, interviewing several friends and family members, and coming home to put all this information together.
After her daughter, Shirley, passed away, Viola moved into the Good Samaritan Society of Scotland. She was very happy in her new home, enjoying the fellowship and great care Good Sam offered.
Viola passed away on Friday, June 19, 2015 at the Good Samaritan Society of Scotland having attained the age of 96 years, 4 months, and 5 days.
She is survived and remembered by her grandsons: Chad (Tonia) Krieger of Yankton and Michael (Paula) Krieger of Columbus, NE; five great-grandchildren: Meaghan (James) Long and Mitchell Krieger of Lincoln, NE, Curtis Krieger and Kyle Krieger of Columbus,  NE, and Laura Beth Krieger of Norfolk, NE; one great-great-grandson Carter Allen Long of Lincoln, NE; one former daughter-in-law Velma (Gary) Kuchta of Yankton, SD;  nieces and nephews; and many friends.
Preceding her in death was her husband Allo Auch, daughters Ilene and Shirley, sons Dennis and Allen, her parents, and brothers: Roy, Glenn, and Harvey Sunderman and their wives.
To order memorial trees or send flowers to the family in memory of Viola  Auch, please visit our flower store.