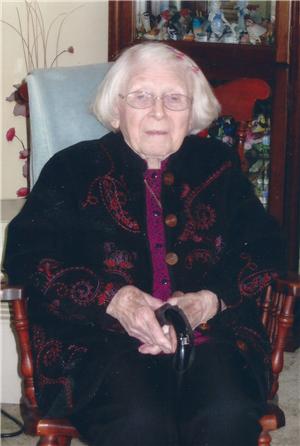 CLERGY
Rev. Barry Nelson
MUSIC
Organist ~ Karen Huether
Congregational Hymns
“How Great Thou Art”
“Just As I Am, Without One Plea”
“What a Friend We Have in Jesus”
CASKETBEARERS
Duane Buchman
Kelly Gregg
Larry Stolz
Laurie Vellek
Derald Schnabel
Melvin Konrad
Viola (Schnabel) Freier was born on October 2, 1917 to August and Lydia (Meyer) Schnabel in Tripp, South Dakota. She was baptized on November 25, 1917 and confirmed on June 26, 1932 by Rev. W. J. Kreiger at the Frieden’s Reformed Salem Church in Tripp. Viola and her siblings did not have an easy life because their dad died when he was only 30 years old. Viola’s mother never remarried so she had the hardship of raising five children.
On November 22, 1938, Viola was united in marriage to John E. Freier by K.J. Stuebbe in Tripp, South Dakota. They became lifelong members of First American Lutheran Church in Tripp. Together they farmed northwest of Tripp until October 1966. They moved into Tripp where Viola helped her husband paint and work as janitors at the Tripp State Bank for many years. She enjoyed sewing, crocheting, and making quilts.
Viola was in her own home until November of 2013 when she suffered a stroke and moved into the Good Samaritan Society of Tripp. On March 16, 2016, she entered hospice care at the St. Benedict Health Center in Parkston. At the age of 98 years, she went home to be with the Lord on March 19, 2016.
Those who will cherish her memory are her two daughters: Marjorie (Larry) Zeeb of Menno and Linda (Carl) Zeeb of Menno; two grandchildren: Bonnie Bauer of Houston, TX and Tammy Simon of Sioux Falls; and one great-granddaughter Sydney Simon.
Viola was preceded in death by her husband, parents, infant son Bobby, granddaughter Brenda, brothers Albert and Art, an infant sister, and sisters Lenora and Edna.

one hour prior to the funeral service
To order memorial trees or send flowers to the family in memory of Viola  Freier, please visit our flower store.