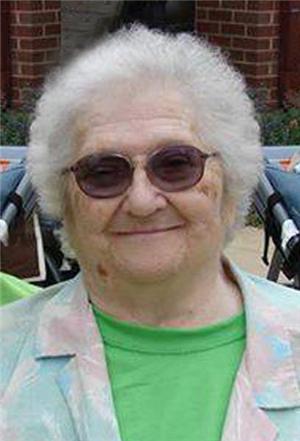 CLERGY
Fr. Joe Forcelle
MUSIC
Organist ~ Marcene Kniffen
Congregational Hymns
"How Great Thou Art"
“Only a Shadow”
“I Am the Bread of Life”
“On Eagle’s Wings”
“The King of Love My Shepherd Is”
HONORARY CASKETBEARERS
Staff & Residents of Good Samaritan Society of Tyndall
CASKETBEARERS
David Auch
Kevin Carda
David Horkey
Doug Janssen
Robert O'Grady
Darrel Pavel
Violet Dorothy “Vi” Schneider was born on Sunday, October 4, 1936 in Hutchinson County near Tripp, South Dakota to Joseph and Lillian (Petrik) Plavec. She graduated from Tyndall High School in 1955. Vi was united in marriage to Edward Schneider on February 4, 1958 at St. Leo Catholic Church in Tyndall. They farmed on the Plavec farm northwest of Tyndall until moving into Tyndall in 1984. In addition to being a farm wife, she worked for many years at the Abstract Office in the courthouse. In later years, she also had various cleaning jobs at several businesses in the community. Vi enjoyed playing the accordion and caring for her animals. She was a member of St. Leo Catholic Church and St. Leo Altar Society. She had previously been a member of Sts. Cyril and Methodius Catholic Church (Vodnany) near Scotland where she sang in the choir. She was also a member of Catholic Workmen #60 and the Scotland VFW Auxiliary. Vi became a resident of the Good Samaritan Society of Tyndall in April of 2007, and it is there that she passed away on Friday, October 11, 2013, having attained the age of 77 years and 7 days.
Vi will be lovingly remembered by her son, Greg Schneider of Tyndall, and numerous extended family and friends.
She was preceded in death by her parents, Joseph and Lillian Plavec, and her husband, Ed Schneider, on May 11, 1997.
To order memorial trees or send flowers to the family in memory of Violet Dorothy "Vi" Schneider, please visit our flower store.