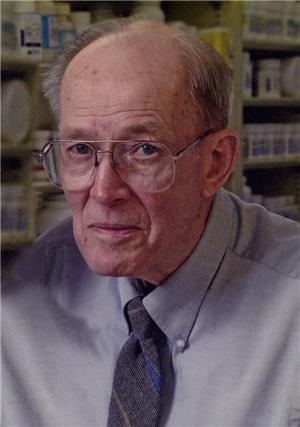 CELEBRANT
Fr. Joe Forcelle
Fr. James Bretzke, S.J.
MUSIC
Organist ~ Kathy Koenig
“Come to Me”
“We Remember”
“Ave Maria”
“I Am the Bread of Life”
Honorary Casketbearers
Jim Guy
Jim Koenig
Lowell Nelson
La Mont Lange
Active Casketbearers
Wayne Schuurmans
Bryce Knudson
Ron Wagner
Matt Balvin
George Mudder
Mike Schmidt
William “Bill” Hoch was born on July 7, 1921 to Joseph and Anna (Zolnowsky) Hoch in Tyndall, South Dakota. Bill graduated from Tyndall High School in 1939 and studied pharmacy at Creighton University for two years before enlisting in the Army Air Corps.  He served in Burma as a cryptographic technician until the end of the Second World War.  On June 3, 1947 he married Vera Balvin and they had two children, Gregory and Jeanne. Bill completed his pharmacy degree at South Dakota State University. In 1948 when his father, who had opened Hoch Drug in 1914, retired Bill began his career as pharmacist and businessman which spanned over sixty-two years. For many of those years, he was the oldest practicing pharmacist in South Dakota.  Working in the drugstore was not only his vocation, but also his greatest joy.
A sports enthusiast, he enjoyed following his favorite baseball and football teams. He also loved to hunt, fish, play golf, attend Wednesday-night meetings of the poker club, and in his later years, frequent pinochle games with his friends.
Bill was a member of St. Leo's Catholic Church and the Knights of Columbus. He was also a member of the Tyndall Fire Department, the Veterans of Foreign Wars, the American Legion, the Rotary Club, and the Chamber of Commerce.
Bill is survived by his daughter and many nieces and nephews.
He was preceded in death by his wife, son, parents, and his five siblings.
To order memorial trees or send flowers to the family in memory of William "Bill"  Hoch, please visit our flower store.